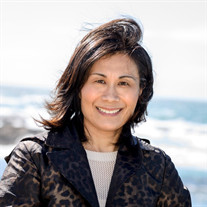 On Wednesday, January 8th, 2020, Ying Liu Brown, loving wife and mother of two children, passed away at age 50 after a brief illness. Ying was born on September 25, 1969 in Zoucheng, Shandong Province to Yong Jing and Mei Qin. She received her BSEE degree from the Nankai University (NKU) in Tianjin, China in 1992, and an MSEE degree from Clemson University in 1995. She was an ASIC Design Engineer for 25 years in Atlanta, GA and Raleigh, NC for VLSI, IBM, Qimonda, Cisco, and finally Microsoft. On October 21st, 1995, she married David Eugene Brown. They have a daughter, Claire (18), and a son, Nash (14). Ying’s passion was her family and her children. She worked tirelessly to prepare them for life, to love them, to care for them, in all ways: academically, emotionally, and physically. She never stopped thinking of their well-being even as she was extremely ill. She was filled with excitement and great joy anytime she helped them with homework. She liked the outdoors and nature and would radiate a special inner contentment after family activities. She had many friends from all walks and periods of her life, professional and personal. She was loved by all for her humor, thoughtfulness, quick wit, strong spirit, smile, and kind nature. Ying was an organ donor. It is fitting her last act was one of generosity and selflessness. On the way to the operating room the staff lined the halls as she was taken. The family coordinator reported that this was the first time she had ever seen that happen. After Ying arrived the staff held a Moment of Honor for her and were told of the wonderful person she was. Ying was preceded in death by her father, Jing, and her mother, Mei. She is survived by her husband David, their two children, Claire and Nash, her two brothers Kun and Qi, and several cousins, nieces, and nephews. A funeral service will be held on Friday, January 17th, 2020 at Crosspointe Church on 6911 Carpenter Fire Station Road, Cary NC 27519 with visitation at 11 a.m. and the service at noon. In lieu of flowers please donate to your favorite charity.

On Wednesday, January 8th, 2020, Ying Liu Brown, loving wife and mother of two children, passed away at age 50 after a brief illness. Ying was born on September 25, 1969 in Zoucheng, Shandong Province to Yong Jing and Mei Qin. She received... View Obituary & Service Information

The family of Ying Liu Brown created this Life Tributes page to make it easy to share your memories.

Send flowers to the Brown family.