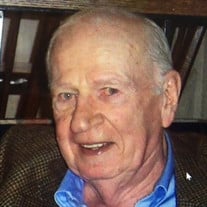 William Francis Russell, Jr. passed away on December 25, 2017, at the age of 85. Bill was born August 2, 1932 in Jersey City, NJ, where he was raised with his older sister Joan (Kearsley), who preceded him in death in 2016. He was the son of William F. Russell, Sr. and Augusta (Gaffney) Russell. Upon graduating from Henry Snyder High School in Jersey City, NJ, Bill spent four years in the United States Air Force and served in the Korean War. Bill married and had six children with Arline (Shalvey) Russell. Arline preceded him in death in 1985. Bill had a successful career in the construction industry as a Construction Superintendent leading many large projects including hospitals, malls and shopping centers. Although Bill considered New Jersey his home he had stops along the way including a 6-month stint in Saudi Arabia. Other places Bill lived were Naperville, IL, Fairfax Station, VA, Brigantine, NJ and Apex, NC. Bill felt most at home being surrounded by his children and grandchildren no matter the location. Bill’s kind, quiet demeanor was a sweet paradox to the “fox” who loved to dance. His love of all things sports was unmatched. Whether it was watching Sunday NFL, Saturday college basketball or his children and grandchildren’s weekend sports, he enjoyed them all. Bill is survived by his wife, Lois (O’Connor) Russell of Brigantine, NJ; by his six children; Maureen (Michael) Hughes of Apex, NC; William Russell, III of Saratoga Springs, NY; James (Holly) Russell of Haddon Heights, NJ; Cathleen Russell of Apex, NC; Patricia (Kenneth) Kealey of Alexandria, VA; and Meghan (Michael) Dickinson of Apex, NC. He is also survived by nine grandchildren whom he loved and adored to no end; Brian and Matthew Hughes of Apex, NC; Dalton, Rylee and Luke Russell of Haddon Heights, NJ; Russell Kealey of Alexandria, VA; and Ryan, Connor and Kate Dickinson of Apex, NC. A Catholic Mass Service will be held at St. Anthony's of Padua, 121 Bridge Ave, Red Bank, NJ on Friday, January 19, 2017 at 12pm. In lieu of flowers donations can be made in Bill’s honor to the V Foundation for Cancer Research, 14600 Weston Parkway, Cary, NC 27513. https://www.jimmyv.org/ways-to-give/honor-memorial-gifts/

William Francis Russell, Jr. passed away on December 25, 2017, at the age of 85. Bill was born August 2, 1932 in Jersey City, NJ, where he was raised with his older sister Joan (Kearsley), who preceded him in death in 2016. He was the son of... View Obituary & Service Information

The family of William Francis Russell created this Life Tributes page to make it easy to share your memories.

Send flowers to the Russell family.