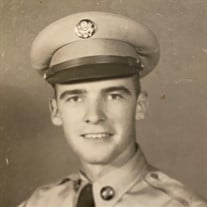 William David Glass, known to his friends as “Bill” passed away on December 31, 2019 at the age of 84. He was born on July 27, 1935 in Philadelphia, PA to George and Caroline (Wustner) Glass. After graduation from high school, Bill joined the United States Army. Upon completion of his service, he moved to Roanoke, VA to pursue a career as an engineer with General Electric. While living in Roanoke he met his late wife of 44 years, Peggy (Hypes). The couple later moved with their two daughters to Burlington, NC. After 35 years with GE, Bill retired and the couple moved to Emerald Isle, NC. Bill is survived by his two daughters, Wendy (Raj) Kapadia of Cary, NC and Tammy (Scott) Cissel of Wake Forest, NC. Additionally, he is survived by four grandchildren and their spouses: Matt (Logan) Kapadia, Blake (Stephanie) Cissel, Caroline Kapadia, and Haley Cissel. His parents, his brother Robert and his wife Peggy, preceded Bill in death. A memorial service will be held on Sunday, 2:00 pm January 5, 2020 at Wake Memorial Park Cemetery located at 7002 Green Hope School Road, Cary, NC 27519. The family would like to thank the incredible staff at The Laurels of Forest Glenn in Garner, NC for their compassionate care and support this year. In lieu of flowers, the family asks that donations be made to the charity of your choice in Bill’s honor.

The family of William "Bill" David Glass created this Life Tributes page to make it easy to share your memories.

William David Glass, known to his friends as “Bill” passed away...

Send flowers to the Glass family.