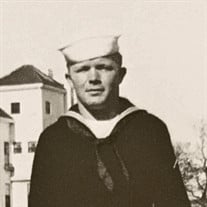 We celebrate the life of Bill Bourgeois - husband, dad, grandpa, Navy veteran, golfer, air traffic controller … Born in Lawrence, MA in 1932 and a graduate of the Edward F. Searle High School in Methuen, MA in 1950 - Bill was the captain of the football team and a three-letterman excelling in football, basketball, and baseball. As a senior, he was awarded the Andrew Haldane trophy given to the student whose outstanding sportsmanship and all round scholastic excellence and friendship merited the award - qualities that resonated throughout his 89 years. He attended Northeastern University and played freshman football for their team. He enlisted in the U.S. Navy spending the next 21 years on active duty, retiring as an Air Traffic Controller Senior Chief and followed by 20 years in the FAA as a Flight Service Specialist. After retiring from the FAA, Bill would be found almost every day at the golf course either working or joining a foursome with friends. A loving grandpa, he adored his four grandchildren - traveling all over the country and the world to spend time with them. He is survived by his wife of sixty-seven years, Ann; daughter Nadine and husband Stephen of New York, NY; his son Paul and wife Libby of Orlando, FL; four beloved grandchildren: Meaghan, Susan, Katherine, and Liam; brother Rick and wife Peggy of Tyngsborough, MA; and many loving nieces and nephews. A Funeral Mass will be held at 11:00am, Thursday, November 11, 2021 - Bill and Ann’s 67th wedding anniversary - at Saint Andrew the Apostle Catholic Church in Apex, NC, with a period for reflections at 10:45am. The family requests those attending mass wear a mask to prevent the spread of COVID-19. In lieu of flowers, please make a contribution in Bill’s name to a charitable organization of your choice. The Funeral Mass will be lived streamed on St. Andrew's website. A link will be provided here on the day of the service. The service will be lived streamed at https://youtu.be/eske_W3eTXU

We celebrate the life of Bill Bourgeois - husband, dad, grandpa, Navy veteran, golfer, air traffic controller &#8230; Born in Lawrence, MA in 1932 and a graduate of the Edward F. Searle High School in Methuen, MA in 1950 - Bill was the captain... View Obituary & Service Information

The family of William "Bill" Bourgeois created this Life Tributes page to make it easy to share your memories.

We celebrate the life of Bill Bourgeois - husband, dad, grandpa,...