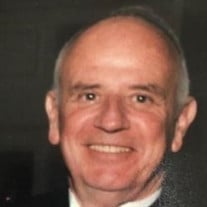 William Paul (Bill) Auble, 77, passed away April 29th after a courageous battle with several physical challenges. He spent 33 years teaching science and chemistry in middle schools, high schools, and community colleges all over the country. He enjoyed the excitement and spontaneity of his students and was honored to be their teacher. Husband of Julie (Rabaut) for 54 years, father of Michael (Rita-Marie) and amazing grandfather to Zachary. Surviving also are sisters-in-law Sandra Auble, Kathie Rabaut, Paula Elrod (Gib), Sue Childs (Ron), Mary Lou Severin (John), brother-in-law Tom Rabaut (Colleen), cherished sister Mary Burke, uncle and great uncle to many. Predeceased by brother Richard Auble and sister Susan Mrowca. Master of Sassy who walked many, many miles with him. Bill was born in Detroit, Michigan to the late Matthew Auble and the late Frances McGraw Auble. He graduated from Grosse Pointe High School in Grosse Pointe, Michigan in 1960. He received a B.S. degree in Chemistry and an MBA from Wayne State University, as well as earning an advanced degree in Education Administration and Supervision from Southern Connecticut University. He taught science and chemistry at Rodgers Junior High School in St. Clair Shores, Michigan; Chisholm Middle School in Round Rock, Texas; Klein Oak High School in Spring, Texas; Bethel High School in Bethel, Connecticut; Wake Technical Community College in Raleigh, North Carolina. He received many “Best Teacher” awards throughout his education tenure. Bill was department chairperson in many of his positions as well as baseball and football coach of Mike’s sports. He took part in building playgrounds for local children, reading for the blind on local radio stations and was elected the ground committee co-chair in the Lakeridge community. Although he never spoke about it, he was a five-time medalist in the North Carolina Senior games for basketball free-throws!! A celebration of life will be held at a later date. In lieu of flowers, donations may be sent to the Bethel Education Foundation, P.O. Box 92, Bethel, CT, 06801 or your local food bank in his memory. He will be missed by many.

The family of William Paul Auble created this Life Tributes page to make it easy to share your memories.

Send flowers to the Auble family.