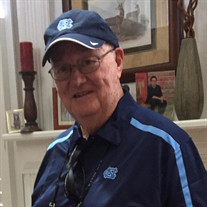 We mourn the loss of our husband, father, uncle, grandfather, brother, and dear friend Wallace Tyser, who passed away on Tuesday, October 12 at UNC-Hillsborough Hospital. Wally was 77 years old when he departed peacefully in the presence of his family. Wally was born and raised in Gastonia, NC, where he attended Ashley High School. He went on to Gardner Webb and UNC-Chapel Hill where he completed his undergraduate and law degrees. After college, Wally practiced law for Barclays Bank in Charlotte and for Oakwood/Clayton Homes in Winston Salem and Knoxville, TN. Professionally successful in his long career as a lawyer, Wally always put his family and his passions for reading and learning at the center of his life. Known for his sharp intellect and his broad reading in history and culture, Wally delighted his family, including his many nephews, nieces, and in-laws, with his droll and ironic sense of humor and his endless capacity for talking politics and debating ideas. More than his capacious mind, it was his generous heart that made Wally larger-than-life to people who knew him. Wally’s real legacy is his thoughtfulness and kindness. He was always there for his family, eager to lend a hand, a word of encouragement, or just his presence when it was needed. He leaves sadness in his wake, but also gratefulness. His was a life to celebrate. Wally assembled complex model ships, read voraciously, and was an avid golfer and tennis player. Greater than these passions was his love of the Tar Heels. When his favorite players Antawn Jamison, Phil Ford, and Michael Jordan were weaving their magic on the court and the Heels were winning, Wally was happy, though his long experience as a Heels fan restrained him from celebrating until the final buzzer. In retirement, Wally enjoyed serving as an usher at the Dean Dome and at Keenan Memorial Stadium where he got to help people and enjoy watching his beloved Tar Heels play. The loss of Wally leaves a hole in our lives and hearts that cannot be filled. The many wonderful memories that come when we gather to remember Wally, and the thankfulness we share for the years spent in his presence, are a great consolation. Wally is survived by his beloved wife Becky Tyser, his sisters Harriet Russell and Sharon Throckmorton, his daughters Melinda Brunner and Pam Savino, and his grandchildren Kyle Brunner, Cassie Turner, Connor Brunner, Austin Turner and Anna Turner. Visitation will be held on Wednesday, October 20th from 11:00 am – Noon at Wake Memorial Park (7002 Green Hope School Rd, Cary, NC) with the funeral service at Noon. The family requests those who wish to express sympathy to consider making a donation to the Alzheimer's Association (www.alz.org) in Wally’s name.

We mourn the loss of our husband, father, uncle, grandfather, brother, and dear friend Wallace Tyser, who passed away on Tuesday, October 12 at UNC-Hillsborough Hospital. Wally was 77 years old when he departed peacefully in the presence of... View Obituary & Service Information

The family of Wallace Tyser Jr. created this Life Tributes page to make it easy to share your memories.

We mourn the loss of our husband, father, uncle, grandfather,...

Send flowers to the Tyser family.