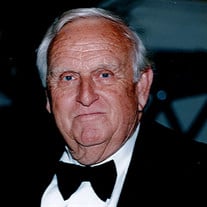 W. Raymond Johnson, Jr., lifelong, well respected member of the Carpenter community passed away peacefully at home Monday, August 28, 2017 at the age of 89. Mr. Johnson was born April 11, 1928 in Wake County to the late, William Raymond Johnson, Sr. and Pattie May Hobgood Johnson Askew. Raymond is survived by his wife of 65 years, Emma Johnson; son, William Johnson (Sherry) of Cary, NC; and daughter Melinda Massingale of Stanfield, NC. Also surviving are his grandchildren: Travis Johnson (Jenni), Candice Pepin (Dave), Adam Johnson (Rosanna), and Tyler Massingale; five great grandchildren: Abigail Johnson, Grace Johnson, Eli Johnson, Stella Pepin and Hattie Pepin. He was predeceased in death by his parents, his step-father, Herbert Askew, and four sisters, Rosa May Johnson, Esther Louise Johnson, Ruth Ellen Rowe and Grace Hobgood Land. Mr. Johnson graduated from the original Green Hope High School in 1945 and attended NC State College. He was a WWII veteran serving in the military from 1946-1948 with the occupational forces and was stationed in Osaka, Japan. It was a privilege for him to be selected for the WWII Memorial Flight of Honor to Washington, D.C. A successful and diversified farmer, Raymond primarily raised tobacco, but was also engaged in commercial egg production. He raised layer chickens and was contracted to Central Carolina Farmers Cooperative in Durham for the sale of eggs. He collaborated with NC State Extension Service and CP&L agricultural engineers to start on-farm feed processing. He owned and operated Johnson Feed Mill and in 1977, he retired from farming and was employed by Triangle Auto and Truck Repair until declining health at age 87. Serving on the board of directors of the Tarheel Production Credit Association for 10 years, he was recognized by the Federal Intermediate Credit Bank of Columbia for his distinguished and unselfish service. Prior to becoming housebound, he was an active member of Green Level Baptist Church and the W.C. Mills Sunday School Class. Through the years, he served as Sunday school teacher, Superintendent of Sunday school, Deacon, and Trustee of the church. He also served as leader of the RA’s. Mr. Johnson, a 32nd degree mason, was a life member of Green Level Masonic Lodge #277, AF & AM in Cary, NC. He served as Master of the lodge in 1958. The Grand Lodge of AF & AM of North Carolina presented Mr. Johnson with a certificate of recognition of his 60 years as a Master Mason, December 31, 2009. He was a charter member of Amran Temple A.A.O.N.M.S. of Raleigh, NC. As a Shriner, it was his pleasure to serve on the wrecking crew. He was also a Past Patron of Edith Chapter #160, Order of the Eastern Star, serving numerous positions on local and state levels over the course of 55 years of membership. The family will receive friends at the home Thursday, August 31, 2017 from the hours 2-4 and 6-8. Services celebrating Mr. Johnson’s life will be held at Green Level Baptist Church, 8509 Green Level Church Rd., Cary, NC at 11:00am, Friday, September 1, 2017. Reverend David Baker will officiate. Interment will follow in the church cemetery with Masonic Rites. In lieu of flowers, contributions may be made to the Masonic Home for Children at Oxford, 600 College Street, Oxford, NC 27565.

The family of W. Raymond Johnson Jr. created this Life Tributes page to make it easy to share your memories.