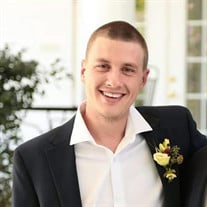 Thomas “Tommy” Craig Armstrong, 27, went to be with his Lord on Sunday, March 5, 2017 in the late morning. Tommy was born on October 13, 1989, at Rex Hospital in Raleigh, N.C. to John “Jack” Morris Armstrong and Teena Jane Martin Armstrong. In addition to his parents he is survived by his two brothers: Samuel Martin Armstrong of Apex, Douglas Elliott Armstrong of Crestview, FL, and an uncle, Clint Franklin Martin, Jr. of Kenly N.C. The family will receive friends on Saturday, March 18, 2017, from 12:00 p.m. to 2:00 p.m. at Peace Presbyterian Church, 1777 W. Chatham St., Cary, NC 27513. A funeral service will be held at 2:00 p.m. A private burial will be held at 4:00 p.m. at Wake Memorial Park Cemetery in Cary. In lieu of flowers, memorial contributions may be made to Vietnam Veterans of America at www.VVA.org. Tommy grew up in the Cary-Apex area, attended Cary Christian School (class of 2008), and attended some college at Campbell University and Wake Technical Community College. He was a lover of “mopars.” Along with his dad and brothers, he restored a 1966 silver Dodge charger. He later bought and helped restore a 1969 Dodge charger. Being a car guy, it was not surprising that he wanted to learn all he could about cars, and this was his vocation, auto mechanic. He had just started a new job at C&C Auto. Besides cars, his main hobby was fishing. He was an avid lake, pond, and salt water fisherman. Many times he would fish before and after work! He and his brothers also enjoyed golfing, skeet shooting, and hunting. He was a member of the Fuquay-Varina church of Christ. “Tommy, left this world a better place this past Sunday morning. In his short 27 years, he brought all who knew him memories that only an accepting heart and a loving soul could provide. Tommy was special in that way. Who you were, or where you were at in life didn't matter to him. You were important, you were loved, and he let you know that. To Tommy, "his people" (all of us close to him) were the most valued gifts this life had given him. If you were lucky enough to have known Tommy, you knew he wouldn't just give you the shirt off his back; he would take you shopping, buy you dinner, and then give you a small loan until you got back on your feet. That was how our brother made a big impact on our hearts.” Tuck

The family of Thomas "Tommy" Craig Armstrong created this Life Tributes page to make it easy to share your memories.