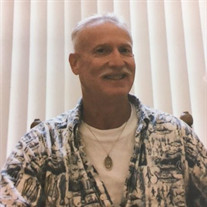 Thomas Donald Riesett (63) of Cary, North Carolina died unexpectedly on Thanksgiving, November 24, 2016. Tom was born in Baltimore, Maryland February 27, 1953, son of Patricia Scheihing Riesett and Donald Francis Riesett. Tom was raised Catholic in Falls Church, Virginia; the oldest of five children, graduated from Roanoke College, and raised his three children in Lexington, North Carolina. He was preceded in death by his father, Donald Francis Riesett. Tom leaves behind his mother, Patricia Scheihing Riesett of Cary, North Carolina; three children, a daughter Stephanie Abbigail Riesett (23) of Durham, North Carolina, Chadwick Jay Riesett (25) and his wife Hannah Bethune Riesett (26) of Winston-Salem, North Carolina, and Patrick Thomas Riesett (35) of Clemmons, North Carolina. Tom also leaves behind two sisters and two brothers and their spouses; Jonathan Ames Riesett, Claudia Riesett Cannata and her husband Gene Cannata, Mathew Gregory Riesett and his wife Carol Ryder Riesett, and Nancy Riesett Jones and her husband Larry Jones; as well as a very special Godchild, Katherine "Kate" Elizabeth Cannata. Tom additionally leaves behind many nieces and nephews who he totally adored. Tom loved his family dearly, especially his children. Tom leaves behind many beloved cousins, two Aunts and an Uncle still living, all originally of Baltimore, Maryland. Tom began his career in the flooring industry running a business with his father in Arlington, Virginia, and at the peak of his career was Vice President of Sales with Mannington Tile Company in Lexington, North Carolina. Tom had a heart that was larger than life itself and he loved Rock-N-Roll music. His favorite artists were Fleetwood Mac and Stevie Nicks, Bruce Springsteen, and Bob Seger. His favorite song was "Against the Wind" by Bob Seger which seemed to mirror his life. Tom's spirit will forever leave an indelible imprint within each of our lives with so many fond memories of abundant love. Tom Riesett will be missed by all in a very special way. Peace be with you Thomas Donald Riesett, our father, son, brother, and precious child of God. Arrangements are being handled by Wake Funeral & Cremation and a Memorial Service will be held Friday, December 2nd, 12:00 p.m. at St. Michael The Archangel Catholic Church in Cary, North Carolina.

The family of Thomas Donald Riesett created this Life Tributes page to make it easy to share your memories.

Send flowers to the Riesett family.