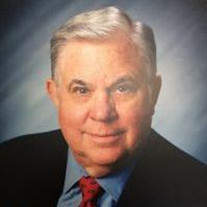 Tomas A. O’Boyle, M.D., died peacefully on August 22, 2015 in Raleigh, NC, surrounded by his loving family. Born July 24, 1935 in Scranton, Pennsylvania, he was the son of the late attorney Thomas F. and Ursula Manley O’Boyle. He was a graduate of Xavier High School, New York, NY; St. Peter’s College, Jersey City, NJ; and Georgetown University School of Medicine, Washington, DC, and greatly valued the Jesuit education he received. Following his service in the United States Army, he began his pediatric residency at Children’s Hospital in Washington, DC. It was there that he met his wife, Gretchen. Falling head over heels in love, he asked her to become his bride after only three weeks. Luckily for him she said yes, and they were recently looking forward to celebrating their 50th wedding anniversary in April 2016. In 1968 he returned to the Scranton area to open a private pediatric practice, following in the footsteps of his grandfather and uncle, who practiced as physicians in Scranton dating back to 1887. After more than 40 years of caring for children, he retired from private practice in January 2001, and remained as Physician Emeritus for all three area hospitals. He also served as Assistant Professor of Pediatrics for several medical school residency programs. He was a member of the American Medical Association, Pennsylvania Medical Society, and Lackawanna Medical Society, for which he served as President in 1983, and was awarded the Presidential Achievement Award in 2001. He was also a member of the American Legion Post 187, the last legion post in the United States composed exclusively of medical professionals. Tom was well known among his friends for his love of fishing and hunting, and was happiest in nature with a rod or a rifle and his dog, Clancy. In addition, he was a voracious reader and could expound on any historical topic in great detail without hesitation. Tom and Gretchen made their home and raised their daughters in the Scranton area for more than 40 years. In 2010, they relocated to North Carolina to be near their grandchildren. Wednesday was always his favorite day: in Scranton those days were spent outdoors, and in Cary they were dedicated to spending time with The Illustrious Coffee Drinking Crew, a group of retired gentlemen who meet weekly to discuss and solve all of the world’s problems. His only complaint being that Washington never sought their counsel. He is survived by his wife, Gretchen, Cary, NC; daughters Ursula and her husband Timothy Reilly, Springfield, VA; Brigid and her husband James Farrell; Tess; and Christine and her husband Jude Carey, all of Cary, NC. Grampy (Bumpy) will be dearly missed by his six grandchildren: Benjamin and Henry Farrell, Miriam, Jude, and Gretchen Carey, and Nora Reilly. He was predeceased by his sister, Mary Ursula Boyer. A Mass of Resurrection will be held 11:00 am Friday, August 28, 2015 at St. Michael The Archangel Catholic Church, 804 High House Rd, Cary, NC. The family will receive friends from 10:00 to 11:00 am in the church parlor. Inurnment will be in the church columbarium with Military Honors. A Mass of Resurrection will be held 11:00 am Saturday, September 5, 2015 at St. Paul Parish, 1510 Penn Ave, Scranton, PA 18509 The family will receive friends from 9:00 to 11:00 am in the church parlor. In lieu of flowers, memorial contributions may be made to St. Joseph’s Center, 2010 Adams Avenue Scranton, PA 18509.

The family of Dr. Thomas Anthony O'Boyle created this Life Tributes page to make it easy to share your memories.

Send flowers to the O'Boyle family.