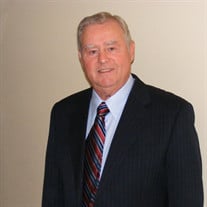 Thomas Allen Eddins Jr, 85, of Cary, NC passed away on Friday November 6, 2020 of heart failure after spending a couple wonderful weeks with family and friends at his beloved second home in Ocean Isle Beach, NC. Tom, as he was known to family and friends, was born and grew up in Old Hickory, TN. He was part of a large family and graduated from Dupont High School in 1954, where he was involved in many clubs and was Student Body President his senior year. Tom was always known for his intelligence and friendliness - he never met a stranger. He was a loyal and hard-working employee, a loving and kind-hearted husband, father and grandfather and all-around salt-of-the-earth kind of person. He enjoyed spending time with family, going to the beach, fixing things around the house and golfing with friends. As a young man, Tom helped his father with digging wells and worked on the family farm. After graduating from high school, he briefly attended the University of Tennessee and then joined IBM where he worked in the Service Division for 41 years. He was married to his high school sweetheart, Jane Sutton, for 9 years, during which they had 2 daughters, Cheryl Jane and Amy Lynne. Later, he met and married Lois, the love of his life and wife for over half a century. During his time with IBM, he lived with Lois in Tennessee, California, Virginia (where his daughter Christina Rhea was born), Maryland, New York (where his son Thomas Allen III was born), and finally settled in Raleigh, North Carolina. While living in North Raleigh, Tom and Lois enjoyed square dancing, a neighborhood couples progressive dinner club and spending time with family. Tom ran the neighborhood 4th of July festival and also helped to organize the streetside luminaria display every Christmas for several years. In 2006, Tom and Lois moved into a house they built with their daughter Tina and her family of 5. They often likened their relationship to the Walton’s and were able to enjoy 14 years together as a large family group. During this time, Tom and Lois started a Treasure Tower toy franchise together and distributed 25-cent packets of joy, through medical offices, to children throughout North Carolina for nearly a decade. They always enjoyed travelling to Greensboro and Boone to spend time with their other 3 children and their families as well. Tom is survived by his wife of 54 years, Lois Scharfetter Eddins, his brother Perry Eddins, four children Cheryl Eddins, Amy Arnesen (Rich), Tina Goodall (Bill), Tom Eddins, and six grandchildren (Peter and Stella Arnesen, Will, Ian and Catherine Goodall, and Teila Eddins). Tom was predeceased by parents Thomas and Stella Eddins, brothers Milton, David, Charles, Eugene and James Eddins, sisters Ruby Laney, Lula Mai Crowder, Annie Strader, Elizabeth Wix, Dorothy Huffines and one grandson, Emory Liam Eddins. A viewing for family members will take place Thursday, November 12 and memorial service at 11:00am Friday, November 13, 2020 at Wake Memorial Park. The service will be available for viewing by family and friends via Facebook live, with photos, links and information at www.WakeFuneral.com. In lieu of flowers, donations may be made to Christian Appalachian Project at https://christianapp.org/honor-memorial-gifts The service will be live streamed on Facebook at https://www.facebook.com/Wake-Funeral-and-Cremation-Services-Inc-556902044455261

Thomas Allen Eddins Jr, 85, of Cary, NC passed away on Friday November 6, 2020 of heart failure after spending a couple wonderful weeks with family and friends at his beloved second home in Ocean Isle Beach, NC. Tom, as he was known to family... View Obituary & Service Information

The family of Thomas Allen Eddins Jr. created this Life Tributes page to make it easy to share your memories.

Send flowers to the Eddins family.