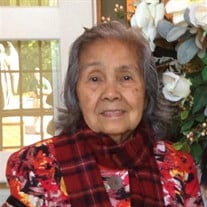 On March 14, 2019, Teresa A. Toledo, who was born to Teodoro and Tomasa Alegado was called to join our Lord. She was 91 years old. She has been living with her daughter and her family until her illness and has been since living at Senters Memory Care in Fuquay- Varina until her death with her daughter at her side. Teresa was born in Camiling, Tarlac Philippines. She was one of 9 children. Her parents made sure all 9 kids got a college education and she chose to be a teacher. She taught elementary kids in the Philippines. She married her high school sweetheart Pedro Toledo, who was called by the Lord in 1995. They have 2 children, 3 grandchildren and 3 great grandchildren. Teresa lived a very exciting life. She lived in Vientiane, Laos in the late 60’s to the early 70’s when her husband’s company sent him there. Pedro worked for an American Airline company as a mechanic.They brought along their son to be with them. She helped start up the Phillipine School of Laos. Their daughter was born there and at that time they had made a decision to make it their home and had built a house. Unfortunately war broke loose and they had to leave the country and went back home to the Philippines. Not long after, her husband was stationed at Tehran, Iran and they moved their family again. While she was there she worked at the US commissary as a cashier and eventually got a job at the US embassy library as a librarian. Then as faith would have it they had to flee the country in 1978 when another war started. Her husband was being sent to Saudi Arabia but this time Teresa has decided to stay home in the Philippines permanently and they made a life there until she came to the US in 1996. Teresa was well loved by everyone she met. She was and will always be mama to me and my brother but she was also mama to my school friends. She was Lola(grandma) to her grandchildren. She was nanay (mom) here. She was Auntie Es to her numerous nieces and nephews who loved her. She was Manang Es/ Esang to her siblings. She was Ms. Teresa at Senters. But first and foremost she was the daughter of God. She was a devout Catholic and would go to church when she was still able to. She loved reading bible verses and novenas. It saddens us to see her go but we know deep in our heart that Heaven just gained another angel who will be watching over us. And it gives us peace knowing that she is reunited with Pedro.

On March 14, 2019, Teresa A. Toledo, who was born to Teodoro and Tomasa Alegado was called to join our Lord. She was 91 years old. She has been living with her daughter and her family until her illness and has been since living at Senters... View Obituary & Service Information

The family of Teresa A. Toledo created this Life Tributes page to make it easy to share your memories.

Send flowers to the Toledo family.