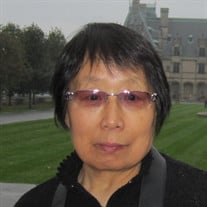 Shen Wang, age 75, of Cary, NC, passed away on Saturday, September 7th, 2019. Shen was born in Shanghai, China on July 27th, 1944 to the late Zujun Wang and Peiheng Ding. Shen was the second child among three. After Shen’s father passed away, the family moved to Qinghuayuan, Beijing. Shen grew up there, attended the elementary school and middle school attached to Tsinghua University. In 1961, Shen graduated from Beijing 101 High School. Shen earned a Bachelor’s degree in Petroleum Engineering from China University of Petroleum, Beijing in 1966. Shen worked in the oil prospecting field for more than 10 years, across several provinces in the western China since graduation. In 1977 Shen moved back to Beijing, and she started working for the Ministry of Geology and Mineral Resources, focusing on the importation of equipment from the developed countries until her retirement from the position. Since then, Shen worked for the Beijing office of Global Petrotech Inc., a family-run company based in Houston, TX. Shen met her first husband, the late Songquan Xu in college. They married in 1971 and their daughter Dong Ding was born in 1974. In 1978 the couple divorced after year of separation. Five years later Shen married the late Bo Han and their marriage lasted 19 years until Bo passed away in 2002. Since her 60’s Shen spent a great deal of her time with her daughter’s family in Los Angeles, CA and Cary, NC. Shen helped raising her grandchildren. In 2016 Shen immigrated to the US to join her daughter’s family permanently. Shen was a beloved sister, mother, and grandmother. Shen is survived by her daughter, Dong Ding and son-in-law Yushun Zhang. She is also survived by two grandchildren, Emma and Bryan Zhang; her brother Qian Wang and his wife Shengmei Li. Funeral services will be held on Thursday September 12 at 10 a.m. at Wake Memorial Park, 7002 Green Hope School Rd. in Cary, NC.

The family of Shen Wang created this Life Tributes page to make it easy to share your memories.

Send flowers to the Wang family.