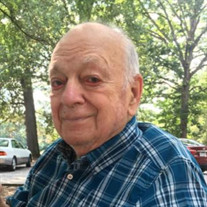 Salvatore (Sam) Jerome Cammarata, 97, of Raleigh, formerly of Batavia NY, died peacefully on Sunday, September 22, 2019. He was born on September 18, 1922 in Newark, NJ to Salvatore and Stephanie Cina Cammarata. Sam was a devoted family man and a wonderful husband to his wife of 56 years, Frances Cammarata. His love and commitment to family is a standard that he set and is now being lived out by the families of his children. He believed that hard work is the key to success and that love for family should be unconditional. The love from his grandchildren is only exceeded by their fond memories of their grandpa. He is survived by son: Sal Cammarata (Eileen Egan-Cammarata) of Cary NC; daughters: Ann Cammarata (Rick Ashby) of Atlanta, GA, and Stephanie Cammarata (Dave McArthur) of Raleigh NC; grandchildren: Evonne McArthur, Nikki McArthur, Cole Ashby, Taylor Cammarata, Ross Ashby and Ryan Cammarata; and many nieces and nephews. Salvatore is preceded in death by his wife, Frances Cammarata, sisters: Josephine Guy, Jay Orrico, and Frances Rosamilia; and his brother, Anthony Cammarata. A funeral mass will be held 1:00 pm Friday, September 27, 2019 at Our Lady of Lourdes, 2718 Overbrook Dr. Raleigh, NC 27608. The family will receive friends one hour prior to the mass. Burial will follow in Raleigh Memorial Park, Raleigh. In lieu of flowers, please send donations in memory of Salvatore J. Cammarata to Transitions LifeCare https://transitionslifecare.org/

The family of Salvatore Jerome Cammarata created this Life Tributes page to make it easy to share your memories.