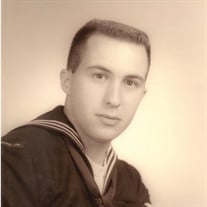 Roger Vallecorse, 82, of Morrisville North Carolina passed away on September 2, 2021, at UNC Rex HealthCare of Raleigh, North Carolina. He was born on October 31st, 1938 in Buffalo, New York to James and Emma Vallecorse. Roger graduated from high school in 1957 and went directly into the Navy, serving the country he loved with honor and dignity for four years on the USS Johnston. His affection for the Navy never ended. He wore his Navy baseball cap until the day he died. After his stint in the United States Navy, Roger moved back to Buffalo, earned his bachelor's degree, and fell in love with his wife of 55 plus years, Karen. Together they raised two children, Lynnette and Brian. We were fortunate to have had him as a father, a mentor, a teacher, and friend. Karen and Roger moved to Rochester, New York where Roger began his career in human resources, eventually becoming the Chief People Officer at Champion Products and later Curtis Burns before retiring to pursue his real pleasure......ravenous reading. Roger was a loving husband and father, a loyal friend, the kind who read nightly to his dying best friend, a selfless son who looked after his mother, and a committed member, deacon, and elder of various Baptist churches from New York to North Carolina. He was a Godly man with an upright moral compass and impeccable ethics. He instilled in his children the importance of living principled, upright lives. Roger was charming and outgoing. He was impish, with a twinkle in his eye that let you know that he was up to some kind of mischief. He loved to laugh and debate and talk about his favorite subject, American History. He was amused and besotted by the pluckiness of West Highland White Terriers. He was a die-hard Buffalo Bills fan and an aficionado of Penn State Football and he took his golf game very, very seriously. His greatest joy in life was being a grandfather. His two grandsons, Samuel and Sutton were the pride of his heart, the apples of his eye, his two greatest joys in life. We all will miss him but we know that he is with Jesus. "When we all get to Heaven, what a day of rejoicing that will be!" He is survived by his widow, Karen (Larson) Vallecorse, his son, Brian Vallecorse, and daughter-in-law, Amy Vallecorse, by his daughter Lynnette Vallecorse, his cherished grandsons, Samuel and Sutton, nieces and nephews, more friends than one could hope to have, and last but not least, Ollie the Westie, his treasured terrier.” He is preceded in death by his parents, James and Emma Vallecorse, and sister, Joyce Elaine Vallecorse. He will be greatly missed. In lieu of flowers, memorial contributions may be made to Good Hope Baptist Church, General Fund at this link. https://goodhopechurch.org/give/

Roger Vallecorse, 82, of Morrisville North Carolina passed away on September 2, 2021, at UNC Rex HealthCare of Raleigh, North Carolina. He was born on October 31st, 1938 in Buffalo, New York to James and Emma Vallecorse. Roger graduated from... View Obituary & Service Information

The family of Roger James Vallecorse created this Life Tributes page to make it easy to share your memories.