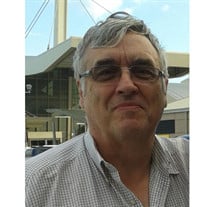 Fuquay Varina – Robin W. Ruck, age 63, went to be with Our Lord, after a long and courageous battle with cancer on Saturday, April 7th, 2018. Rob was born on June 25, 1954 in Folkestone, England, the son of the late William Ruck and Cynthia Monaghan Ruck, and his beloved step-dad, Dan-Dan. As a life-long Anglican, Rob loved God and his family the most. In his early years he served as a member of the Royal Observatory, and later earned his BSME. At the time of his illness, he was employed as a Program Manager for Earl Energy in Raleigh, NC. Rob worked for 40 years as an Engineer. He held several patents and earned numerous professional certificates, and was featured in the Design News Magazine, “Engineering Megatrends,” as a featured industry leader. Rob gave unselfishly of his time to serve in many capacities. He served as a Scouting Commissioner to the Connecticut Rivers Council in Southbury, Connecticut, as a Cub Scout Leader, and as a previous Vestry Board member for the Church of the Epiphany in Southbury, Ct. He was the proud recipient of the Silver Beaver Award, a distinguished service award from the Boy Scouts of America, given to adult leaders who have made a positive impact on the lives of youth. Rob loved cooking, camping, and woodworking. More than anything, Rob deeply loved and cherished his family and his dog, Callie. He is survived by his wife of 29 years, Lisa Ruck of Fuquay Varina; and two sons, Daniel J. Ruck, and Nicholas R. Ruck. He also leaves behind his sister Dani Coleman and brother-in law, Ian Colemen of Folkestone, England, and many nieces and nephews. Rob’s wonderful wit, words of wisdom, and Monty-Python sense of humor will be greatly missed by those who loved him. A funeral mass will be held at 1:00 p.m. on Friday, April 13, 2018 at Church of the Resurrection, 6317 Sunset Lake Road, Fuquay Varina, NC. Interment will follow at Wake Memorial Park, 7002 Green Hope School Road, Cary, NC. at 3:00 p.m. The family will receive friends after the service. Flowers and contributions may be sent to The Church of the Resurrection.

Fuquay Varina &#8211; Robin W. Ruck, age 63, went to be with Our Lord, after a long and courageous battle with cancer on Saturday, April 7th, 2018. Rob was born on June 25, 1954 in Folkestone, England, the son of the late William Ruck and Cynthia... View Obituary & Service Information

The family of Robin "Rob" William Ruck created this Life Tributes page to make it easy to share your memories.

Send flowers to the Ruck family.