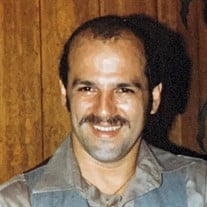 Roberto “Bongo Bob” Granado died peacefully on Tuesday morning at his home in Cary, NC, surrounded by his beloved family. Bob was born in 1943 in the South Bronx, New York City, to Lydia and Robert. The story of his personal redemption is the stuff of Hollywood scripts. After breaking free from a cycle of hardship, addiction and incarceration -- and surviving a heart attack two months before his wedding day! -- he became an ever-smitten and devoted husband of forty years, a loving father to three boys, and an inspiration to many through his church ministry and the sheer enormity of his heart. He was the Director of Facilities at several hospitals in New York City before landing his dream job at Madison Square Garden. Music was the most profound of his many love languages. His deft hands kept the rhythm that moved listeners' hearts in New York City, North Carolina, and Quito, Ecuador, where he delivered his powerful testimony as an empathic missionary. Everyone he met felt his joyful spirit, his playful nature, his love of God and family, and a patient presence that evinced the simple gifts of every breathing moment. In his youth he "ran with" a gang called the "Young Sinners." At his death, we celebrate the gift that is his durable redemption. Bob is survived by his beloved wife Rosanna, his three sons Michael (Anna), Robert (Marielle), and Thomas; his sister Emily; and his four grandchildren Julianna, Anthony, Danica, and Lua. Bob is also survived by his dear parents-in-law Joseph and Rosaria, and many close nephews, nieces and loved ones. A small graveside service with immediate family is held Friday 11am at Wake Memorial in Cary, and all are invited to a celebration at Cary Church of God at 3pm on March 24th. In lieu of flowers the family requests any memorial contributions be made to the Roberto Granado scholarship at the Bronx Lighthouse Charter School in the South Bronx neighborhood where Bob grew up (and where Bob's son Robert serves on the board). Here is the link: https://bronx.lha.net/community/giving.

Roberto &#8220;Bongo Bob&#8221; Granado died peacefully on Tuesday morning at his home in Cary, NC, surrounded by his beloved family. Bob was born in 1943 in the South Bronx, New York City, to Lydia and Robert. The story of his personal redemption... View Obituary & Service Information

The family of Roberto "Bongo Bob" Granado created this Life Tributes page to make it easy to share your memories.

Send flowers to the Granado family.