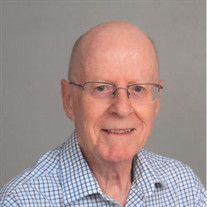 Robert S. Scott, age 86, of Cary, North Carolina passed away on Sunday, January 23, 2022. Robert was born on March 2, 1935 to the late Arthur and Mary Scott in Chelmsford, Massachusetts and was the youngest of three brothers. He spent the larger part of his childhood in Chelmsford, Massachusetts before moving to Springfield, Massachusetts with his mother and grandmother after the passing of his father. Robert pursued his first job at Massachusetts Mutual Life Insurance Company where he met his beloved wife of 65 years, Jayne (Mitchell) Scott. Robert and Jayne married in 1956 and welcomed three beautiful daughters. For 33 years, Robert worked in Consumer Finance, in addition to several other business opportunities—the owner of a Dunkin Donuts franchise as well as a family-owned upholstery business. In addition, Robert was Vice-President of the Kiwanis Club in Rutland, VT and was an Officer (Tiler) of the Elks Raleigh Lodge. While Robert retired at the age of 62, he loved to stay busy. He taught himself Morse code; became a certified, licensed amateur radio operator in 2000; served as a radio liaison to the Red Cross in Raleigh, NC; and became a member of the Amateur Radio Emergency Services (ARES), member of Cary Fire Department, and Communications Committee lead for Carolina Preserve CERT team. He also enjoyed being part of the 25th class of the CAPS team – through the Cary Police department- enjoying all of the events that he could participate in, including the search and rescue events along with TSA dog training at the Raleigh-Durham Airport. During retirement, he worked part-time with Enterprise-Rent-A-Car for close to 17 years. Throughout his life, Robert has formed many friendships with those he had the pleasure to know and work with. He enjoyed being part of the table tennis club at Carolina Preserve – and the many friendships he developed. Robert was preceded in death by his wife, Jayne Mitchell Scott, who passed away in 2020 and his brother Hubert Scott. Robert is survived by his three daughters, Laura Scott, Barbara West and her husband Scott, and Kimberly Lazaro and her husband Barry. He is also survived by his brother Arthur Scott and his wife Nancy; his four grandchildren, Sharon Redmond, Heather West, David West, and Michael West; and many cherished nieces and nephews. Robert Scott’s family will receive family and friends for a graveside service inside the mausoleum from 11:00 am to 12:00 pm on Monday, January 31, 2022 at Wake Memorial Park (7002 Green Hope School Road, Cary, NC 27519). We want to pay special thanks to the DaVita Research Triangle Park Dialysis team for all of their assistance and support over the past years, along with Kellie Cares, LLC for all of the home care services that Kellie provided Robert. Memorial contributions can be made to a charity of your choice or the American Kidney Fund in lieu of flowers.

Robert S. Scott, age 86, of Cary, North Carolina passed away on Sunday, January 23, 2022. Robert was born on March 2, 1935 to the late Arthur and Mary Scott in Chelmsford, Massachusetts and was the youngest of three brothers. He spent the larger... View Obituary & Service Information

The family of Robert Stanley Scott created this Life Tributes page to make it easy to share your memories.

Send flowers to the Scott family.