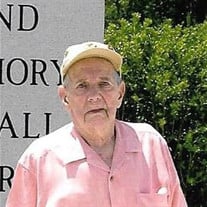 Robert Charles Rhoades passed away on January 1, 2016 at the age of 94 at Wake Med Cary Hospital in Cary, NC. He will be remembered as a devoted soldier, brick mason, plumber, carpenter, coal miner, husband, father and brother. Mr. Rhoades enjoyed golf, sharing stories with his friends and spending time with his family. Mr. Rhoades was born to Wilbur Rhoades and Madeline Downing in Coleville, Pennsylvania on October 23, 1921. He grew up near Penn State University and joined the Army Air Corps at the age of 21. He served as a Staff Sergeant in the United States Army Air Corps during World War II until he was honorably discharged. Mr. Rhoades was assigned to the 8th Air Force, 570th Bombardment Squadron, 390th Bombardment Group, Station 153 in Framlingham, England. While serving in the military, he was a ball turret gunner and flew in three B-17 bombers called the Flak Alley Sally, Sequatchiee and the Liberty Belle. The Sequatchiee was shot down on June 22, 1944 during their 13th bombing run over Paris-St. Ouen, France. Mr. Rhoades parachuted onto Dreux Air Base where he was captured by the Germans and was held as a prisoner for almost two years in Stalag Luft #4 in German occupied Poland. He received the Prisoner of War Medal, Decoration Air Medal, European – African Middle Eastern Campaign Medal with 5 Bronze Stars, American Campaign Medal, Victory – World War II Victory Medal and Army Good Conduct Medal. After the war he returned to Mullens, WV and married Frances Emogene Short. They were married for 61 years and had two sons. His wife and his son, Robert Charles Rhoades, Jr. preceded him in death. Mr. Rhoades is survived by his son, Benjamin Lee Rhoades and his wife, Barbara Cox Rhoades whom reside in Cary, NC; his brother, Dale and sisters Madeline Yarnell and Alma Robinson all from Bellefonte, PA and numerous nieces and nephews. Mr. Rhoades was a lifetime member of the American Legion Post 106, the Loyal Order of Moose Lodge 750 and a lifetime member of the Veterans of Foreign Wars of the United States. On April 6, 2011 Mr. Rhoades had the privilege of going to Washington, DC on the Triangle Flight of Honor and he had the time of his life. He viewed the World War II Memorial and toured various other sites while there. He and the other veterans returned home to a hero’s welcome at Raleigh Durham Airport and it was an exciting night to remember. Visitation will be held at Tankersley Funeral Home at 102 Moran Avenue in Mullens, WV on January 5, 2016 from 5:00 – 7:00 p.m. A graveside service in Blue Ridge Memorial Gardens at 5251 Robert C. Byrd Drive in Beckley, WV on January 6, 2016 at 11:00 a.m. Mr. Rhoades will have full military honors. In lieu of flowers, please make a donation in Mr. Rhoades memory to the USO of NC – RDU, 2400 John Brantley Blvd., Morrisville, NC 27560. The family is very thankful for the support of friends and family during this difficult time. They would like to thank the staff of Jordan Oaks Retirement Community where he resided the last eight years and the Legacy Healthcare Services staff that supported Mr. Rhoades for many months with his physical and occupational therapy.

Robert Charles Rhoades passed away on January 1, 2016 at the age of 94 at Wake Med Cary Hospital in Cary, NC. He will be remembered as a devoted soldier, brick mason, plumber, carpenter, coal miner, husband, father and brother. Mr. Rhoades... View Obituary & Service Information

The family of Robert Charles Rhoades created this Life Tributes page to make it easy to share your memories.

Send flowers to the Rhoades family.