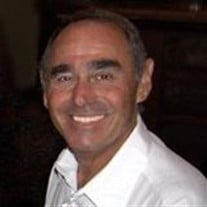 Robert F Hodes passed away on Friday, Sept 4th, 2015 at the age of 69. The youngest of three boys, he was born April 1, 1946 in Newark, NJ to Florence and Joseph Hodes. Surviving him are Allen and Ina Hodes of Springfield NJ and Joel and Sandy Hodes of Sun City, Arizona. Bob walked hand in hand through this life with his wife of 47 years and best friend, Mary Walton Hodes. Bob and Mary met at college in Iowa where he wooed her with his bad boy looks and love of motorcycles. Mary followed him back to NJ where the two wed and began their lives together. They raised their 3 girls Kim, Debbie and Lisa in Brick, NJ. Bob’s greatest pride and joy was his family - teaching the girls about cars, taking them out on his motorcycles and dirt bikes, watching history documentaries, feeding the squirrels in Ocean County park, weeknight trips to Great Adventure and sharing in their lives as they grew up. Bob was employed by the State of NJ as a parole officer, he then became a policy analyst and event planner with the Department of Health and Human Services. He retired in 2002 when the birth of his first grandchild, Tyler, lured him and Mary to NC where they made Cary their new home and soon welcomed their second grandson, Joshua. Soon after, Kim and Lisa also relocated to NC so the family could once again be together. This is when Bob’s golden years truly began. He and Mary started to travel and loved taking cruises with their friends. Becoming a grandfather opened his world and his heart to a new level of love. He enjoyed going to Tyler’s hockey games, taking Josh out for pancakes, having sleepovers, playing hours upon hours of board games and watching the boys grow into caring young men. Bob was always a fun, loving and involved husband, dad, grandfather and friend. His sense of humor, good nature and love is woven into every aspect of his family’s life. All 3 of his girls live in NC, Kim Hodes, Debbie and her husband Jon Paryz with their sons Tyler and Josh and Lisa with her husband Ed Higgins and his daughters Raechel and Jamie. His wonderful community of Heritage Pines brought an abundance of friends, activities and experiences. For 13 years this community and the amazing people in it made every day an adventure. His daughters often joked they could not keep up with his social calendar. He enjoyed bowling, pinochle, swimming, square dancing, acting in the community plays, dominoes and cards, round dancing, organizing the men’s breakfast, cooking for Santa’s breakfast and even began as one of the community’s bus drivers. One of the reasons Bob was so active in this community is because of the outstanding people who live here. In addition to being wonderful friends and neighbors, over the past year they have provided support and love, encouragement and companionship and our family is so very appreciative. There will be a celebration of life to honor Bob at the Heritage Pines Clubhouse Sunday, Sept 20th from 2 to 4pm. Bob was grateful to Duke University Hospital for the care he and his grandson received during their battles with cancer. It was his wish any donations be made to Duke Children’s Pediatric Hematology/Oncology Department in honor of Josh Paryz.

Robert F Hodes passed away on Friday, Sept 4th, 2015 at the age of 69. The youngest of three boys, he was born April 1, 1946 in Newark, NJ to Florence and Joseph Hodes. Surviving him are Allen and Ina Hodes of Springfield NJ and Joel and Sandy... View Obituary & Service Information

The family of Robert Franklin Hodes created this Life Tributes page to make it easy to share your memories.

Send flowers to the Hodes family.