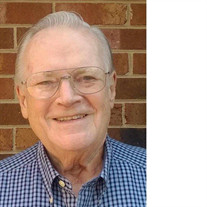 Bob was born in Troy, NY on April 7, 1931 to John and Julia Flaherty. He attended LaSalle Institute and later served as a naval navigator and radio engineer in a land-based anti-submarine patrol squadron during the Korean War. Bob graduated from Siena College in 1955 with a B.S. in Physics and a minor in Mathematics. He later earned an MBA from the University of Virginia. Bob had a long and successful 37-year career with IBM as a product test engineer. During his career, Bob was one of the primary designers of the IBM 7030 Stretch Super-Computer and contributed to numerous patents and computer memory breakthroughs. He worked in Fishkill, NY before transferring to North Carolina in 1976. He married his love, Jean Marie Deecher, in 1955. After leaving Pleasant Valley, NY, Bob and Jean settled in Cary, NC. where they shared 58 happy years together until Jean’s passing in 2013. Bob was a loving, supportive father to his six children and an adoring, generous grandfather to his nine grandchildren. He and Jean created a warm and inviting home where their family thrived and will continue to come together to celebrate life’s milestones. Bob was a very active member of Saint Andrew the Apostle Catholic Church in Apex, NC. He served on the building committee as the new church was under construction. Bob brought comfort and happiness to church members while providing Eucharistic ministry services. He also performed his duties as the head usher during church services. Bob broadened his commitment to community service by joining the Citizens Assisting Police (CAP) Team in Cary, NC. And he served as the CAP chief for many years. Known for his jovial spirit, Bob was always quick with a joke, an infectious laugh and a warm embrace. He’ll be remembered fondly for always having his camera at the ready and for the many photo albums he shared with family and friends. Always supportive of his children’s swimming ambitions, he spent many weekends officiating at swim meets and cheering for the RSA swimmers. A born tinkerer and handy man, Bob often would be found under the hood of a car or in his workroom rewiring hair dryers or repairing kitchen appliances. Bob is survived by his children: Bob Jr. and wife Sarah, Mary Julia Heidepriem and husband Eric, Ann Marie Flaherty, Maureen Maughan and husband Kevin, Tim and wife Julia, and Kathleen Cardoso and husband Cid. Also surviving Bob are his nine grandchildren: Bridget Flaherty Shelton and husband Blake, Connor Flaherty, Leah Heidepriem, Amelia and Ava Maughan, Owen Flaherty and Alexa, Scott and Monica Cardoso. Bob has two surviving sisters, Marilyn Vansteenburg and Joan Blomstran and was preceded in death by his wife Jean, his parents and his younger brother Jack. In lieu of flowers, please consider memorial donations to the Catholic Charities of Raleigh, https://www.catholiccharitiesraleigh.org/

Bob was born in Troy, NY on April 7, 1931 to John and Julia Flaherty. He attended LaSalle Institute and later served as a naval navigator and radio engineer in a land-based anti-submarine patrol squadron during the Korean War. Bob graduated... View Obituary & Service Information

The family of Robert J. Flaherty created this Life Tributes page to make it easy to share your memories.