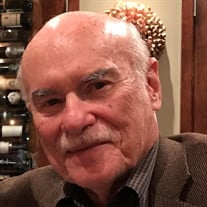 Richard Wallace Riche, 89, passed away on Monday, May 18, 2020. He was preceded in death by his parents, James Lucian Riche and Esther Clara Riche, and adoptive parents, Kenneth and Elva Haskins. He was born in Cedar Rapids, Iowa, on May 15, 1931 and was raised there and in Minneapolis, MN, Seattle, WA, and Oelwein, IA before joining the U.S. Air Force in 1952 during the Korean War serving stateside until his honorary discharge in 1954. He is survived by his beloved wife, Sonya Babiy Riche, whom he married on December 5, 1970. He is also survived by their four wonderful children: Beverly Reed Mueffelmann and her husband, Greg, of Holly Springs, NC; Robert Leslie Reed, Jr. and his wife, Leigh, of Highland, MD; Emily Riche Massey and her husband, Mark, of Cary, NC; and Andrew James Riche and significant other, Aurora, of Oak Hill, VA. Also surviving are grandchildren Deborah Mueffelmann Collins and husband, Jeb; Bec Mueffelmann and partner, Alex; Christopher Mueffelmann and wife, Mary Beth; Taylor Reed, Dana Reed, Nicholas Massey and wife, Kristen; Walker Massey, Colin Massey, Michael Riche, great-granddaughter Eleanor Collins, and a Collins great-grandson. He is also survived by stepsisters, Linda Ellickson and Joan Crippens, of Cedar Rapids, IA. After leaving the Air Force in 1954, he returned to college to complete a degree in economics at the University of Colorado and entered federal service in Washington, DC in 1957 as an International Economist in the Bureau of Foreign Commerce, U.S. Department of Commerce. After a brief period of service in the Japan-Korea section of the department, he accepted a position in the Bureau of Labor Statistics, U.S. Department of Labor. His duties in the Office of Productivity and Technology included supervising and conducting research and publishing reports on the impact of new technology on employment, productivity, occupational and skill requirements, and labor-management relations. He represented the Department of Labor at international conferences and meetings in Europe and South America and was assigned to temporary duty in Paris assisting staff at the Organization for Economic Co-operation and Development (OECD) to develop and carry out research relevant to technological changes underway in the 26 member nations including the United States. He retired from the Department of Labor in 1995 after 39 years of federal service. He and his wife, Sonya, left Bethesda, MD shortly after they retired and moved to Moneta, VA in the Smith Mountain Lake region of southwest Virginia. He was a member of the Episcopal congregation at Trinity Ecumenical Parish in Moneta. He lived with his wife in the Waterfront Country Club and enjoyed playing golf and boating in the surrounding lake area. A private service will be held for immediate family. In lieu of flowers, contributions can be made to Lake Christian Ministries, P.O. Box 695, Moneta, VA 24121-0695 or lakechristianministries.org.

Richard Wallace Riche, 89, passed away on Monday, May 18, 2020. He was preceded in death by his parents, James Lucian Riche and Esther Clara Riche, and adoptive parents, Kenneth and Elva Haskins. He was born in Cedar Rapids, Iowa, on May 15,... View Obituary & Service Information

The family of Richard Wallace Riche created this Life Tributes page to make it easy to share your memories.

Send flowers to the Riche family.