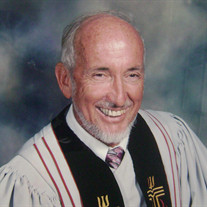 The Rev. Dr. Charles Betts Huntley - our beloved Betts - passed away Monday, June 26, 2017, after a catastrophic 11-day illness. A Presbyterian missionary in Korea, he and his wife always preferred the Korean phrase, "He went back (home).” Betts was born July 9, 1936, the third of four sons, in Charlotte NC. At 14, he was the Charlotte winner and a national finalist in the Soapbox Derby; at age 16 he had a pilot's license and was flying before he got his driver's license. He graduated from Duke University (including a year at the University of Munich) with a history degree, then from Union Theological Seminary, and was ordained a PCUS pastor in 1961, and became pastor of Turner Presbyterian Church in Union County, NC. He and his wife of 55 years, Martha, embarked on their remarkable 20-year journey in Korea beginning in Seoul for two years of language study, followed by an intern year in Soonchun. He received the Master of Divinity degree from Union Seminary the following year, and the family returned to Kwangju, Korea where he taught German and Pastoral Counseling at Honam Theological Seminary, was a hospital chaplain at Kwangju Christian Hospital, and worked with country churches until 1985. The Huntleys also fostered a number of Korean orphans being adopted by American families and were a part of about 50 adoptions in some way. Betts was also an auxiliary chaplain at the US Air Force base nearby for several years. After 20 years in Korea, the family returned to the States where Betts received his Doctor of Ministry degree from Columbia Theological Seminary. He was called as the pastor of First Presbyterian Church in Safety Harbor, FL, where he served for more than a decade. The couple lived in Clearwater, FL, before moving to Cary, NC in 2014. Betts loved hunting, singing, running, scuba diving, cruises, Bible study, meeting new people, sweet iced tea, but most of all the Lord, his family, and the friends he continued to make every day. He spoke three languages fluently and was an accomplished photographer. Betts is survived, in addition to his wife Martha, by four children—Mary (and Chris) Wagner and their children David and Laura Wagner; Susan (and Ron) Crow; Michael Huntley; and Jennifer (and Jeremy) Mario and their children Gretchen, Reid, and Charlie—as well as his brothers Dr. William (and Helen) and Dr. Reid Huntley and their children, Heather, Kimberley, David, and Maria. He is predeceased by his parents William Barney and Mary Betts Huntley, and by his brother John. The memorial service location has changed and now will be held at Triangle Presbyterian Church, 5001 Tudor Place, Durham, at 3 pm on Sunday, July 2 (services will also be held at First Presbyterian Church, Safety Harbor, FL, and in Kwangju, Korea at later dates). In lieu of flowers, be good to one another, love as Jesus loves, and remember Betts' warmth and goodness. A donation of thanksgiving for his life can be made to the Presbyterian Mission Agency, 100 Witherspoon, Louisville, KY 40202.

The Rev. Dr. Charles Betts Huntley - our beloved Betts - passed away Monday, June 26, 2017, after a catastrophic 11-day illness. A Presbyterian missionary in Korea, he and his wife always preferred the Korean phrase, "He went back (home).&#8221; Betts... View Obituary & Service Information

The family of Rev. Dr. Betts Huntley created this Life Tributes page to make it easy to share your memories.