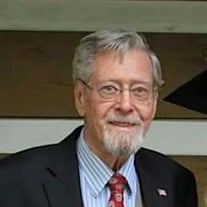 Ralph Owen (R.O.) Hawkins, 85, of Cary NC passed away January 15, 2019. He was born in Smithfield NC August 31, 1933 to Ralph Owen Hawkins and Amanda Stella Horner. He was raised in Pittsboro NC and graduated from Pittsboro High School in 1951. He earned his undergraduate degree and his DDS from UNC-Chapel Hill; he was proud to be a lifelong Tarheel. Ralph was a skilled dentist who was well respected for his diagnostic expertise, friendly demeanor, and empathy toward his patients. He practiced in downtown Cary from 1969 until his retirement in 1997. Ralph loved to share tales of his travels including his naval service on the USS Ajax. While stationed there, he participated in the French withdrawal from Vietnam (then French Indochina). There he learned Tai Chi and served as an interpreter using the French language skills he had acquired while working in NYC and in high school. Ralph maintained these skills throughout his life. He particularly enjoyed beach time at the Jayhawk on Oak Island, where his seafood cooking skills, clam digging and fried okra were legendary. No image of Ralph would be complete without the beloved crossword puzzles he completed nearly every day. Ralph was a longtime member of Cary Rotary and the NC Dental Society where he served as president. He was a member of St. Paul’s Episcopal Church for 50 years. Ralph was preceded in death by his parents and three sisters, Mary Frances H. Mucciariello, Patsy H. Greene, and Sara H. Idol, and his infant brother Thomas David Hawkins. He was married for 53 years to Susan Elizabeth Shannonhouse, who predeceased him seven years ago. He is survived by two sisters: Peggy H. Lemons and husband Earl, and Jo Anne H. Faucher and husband Pierre. He is also survived by daughter Dana H. Hatch and husband David, daughter Myra R. Hawkins, and William D. Lindsay and wife Beth. He leaves four grandchildren whom he loved dearly: Daniel A. Hatch, Caroline B. Hatch, Christopher S. Lindsay and Julia L. Lindsay. Survivors also include brother-in-law T. Gordon Shannonhouse and numerous cousins, nieces, nephews, neighbors, and friends. A memorial service will be held at St. Paul’s Episcopal Church, 221 Union St. Cary at 3PM on Saturday Feb 2nd. Interment will occur in the memorial garden after the service, followed by a celebration of life in the parish hall. Condolences can be made at www.wakefuneral.com. In lieu of flowers, memorial contributions may be made to Heifer International or to Outreach Ministries at St. Paul's Episcopal Church. An absence of lilies is requested for flower memorials.

Ralph Owen (R.O.) Hawkins, 85, of Cary NC passed away January 15, 2019. He was born in Smithfield NC August 31, 1933 to Ralph Owen Hawkins and Amanda Stella Horner. He was raised in Pittsboro NC and graduated from Pittsboro High School in... View Obituary & Service Information

The family of Dr. Ralph Owen Hawkins created this Life Tributes page to make it easy to share your memories.

Send flowers to the Hawkins family.