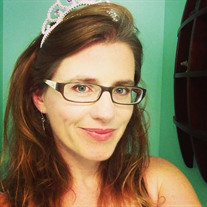 Our beloved and perfectly imperfect Petrina Jo Hamm died unexpectedly on Monday, October 8, 2018 at her home in Apex, NC. Petrina was born in Ilion, NY on December 7, 1972. She was the second child of Peter and Deborah (Miller) Keddell of Durham, NC. She grew up down in the peaceful valley of Ilion with her 4 siblings: Angela, Rebecca, Melissa, and Pete Jr. She was always the ring leader of mischief among the Keddell children. Her education began at Annunciation Catholic School and her family fondly remembers how her pigtails were always crooked, the tie to her uniform askew, and one knee high sock down at her ankle. Petrina later attended Ilion High School where she starred in school plays and excelled in her classes. She graduated in 1991 and was voted Most Unique of her graduating class. She went onto receive her Bachelor's Degree in English at Ithaca College in Ithaca, NY and graduated in 1995. She continued her studies at the University of Buffalo School of Law and graduated in May of 1998. It was following law school when Petrina (with her baby sister Lisa) drove her car Betsy down to North Carolina and relocated to the Triangle area to be closer to family. She had her firstborn child, Spencer Mackenzie Keddell, in 1998 and successfully passed the bar exam as a single mother with a baby. Petrina was immensely proud of this feat. In 2005 she met her best friend, Jonathan Thomas Hamm, and the two married in Las Vegas in early 2006. They had a second wedding ceremony later in the year at Duke Gardens for family and friends to witness their union. Petrina became step-mom to Jon's daughters, Kaila and Isabelle, and Jon officially adopted her son Spencer. It was in 2008 when their family was completed with the birth of their daughter Stella Rose Hamm. Petrina was diagnosed with breast and kidney cancer in 2016. She was fierce in her resolve to kick cancer's ass and developed a huge presence on social media where she bravely shared her fight and recovery. She inspired others (whether it be survivors, those still going through treatment, or her many followers on social media) with her honesty and openness. She decided that she wanted to help other women who were grappling with their mastectomy scars and created the nonprofit organization Art From Scars to help fund mastectomy concealing tattoos for survivors. She is survived by her loving family and online community who will always remember her as a caring, genuine, brave and strong woman. Petrina was quirky. She was quick witted and had the best sense of humor. She gave the best hugs that made others feel loved and accepted. Her laugh was infectious! And none of what is written here truly encapsulates this amazing woman. She will always be our raisin girl. Petrina will be missed but never forgotten. On November 17th, from noon to 2pm we will have a celebration of life at 519 Church located on 1100 Perimeter Park Dr #118, Morrisville, NC 27560. We also hope to broadcast the ceremony using Facebook Live and will provide any additional details as those become available.

Our beloved and perfectly imperfect Petrina Jo Hamm died unexpectedly on Monday, October 8, 2018 at her home in Apex, NC. Petrina was born in Ilion, NY on December 7, 1972. She was the second child of Peter and Deborah (Miller) Keddell of... View Obituary & Service Information

The family of Petrina Jo Hamm created this Life Tributes page to make it easy to share your memories.

Send flowers to the Hamm family.