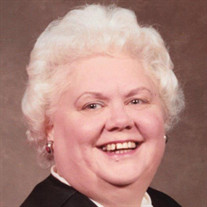 Patricia June (“June”) Shipman entered eternity and the presence of her Savior on Sunday, October 9, 2016 at The Oaks at Mayview in Raleigh, NC after experiencing a series of strokes. She was 84 years old. June was born on June 3, 1932 in Sayreville, New Jersey, the daughter of Woodrow Haussermann and Patricia Kupsch Haussermann. She graduated St. Peter the Apostle High School in New Brunswick, NJ as a member of the class of 1950, and married her husband of almost 50 years, Robert Douglas Shipman on December 25, 1950. For the next few years they lived in various states as he served in the US Air Force before returning to settle in Edison, New Jersey where she dedicated herself to raising their four children. She was a faithful member of First Reformed Church in New Brunswick, NJ where she sang in the choir and directed shows for the Mother-Daughter Banquets. She was an ardent fan of all kinds of music, from sacred and classical works to opera and every Broadway musical known to man. After experiencing a powerful spiritual awakening, she joined her husband in nurturing couples through Marriage Enrichment, promoting spiritual revival through New Jersey for Jesus, and conducting inner healing workshops in their home. They lived for a season in Elizabeth, NJ as active members of a vibrant church community, and then retired to Crossville, Tennessee. She is survived by her children Douglas Shipman, Diana Gonzalez, and Debra Cox and their spouses Kathy Shipman, Jose Gonzalez, and Ronald Cox, and her grandchildren Quena Gonzalez, Jennifer Rivera, Melody Choate, Timothy Baker, David Gonzalez, Daniel Gonzalez, Stephanie Palladino, Robert Cox, and Jonathan Ketchum, along with their spouses and her 23 great-grandchildren. She is predeceased by her husband Robert Shipman, her brother Woodrow Haussermann, her sister Mary Heims and her daughter Donna Carhart. A memorial service celebrating her life and legacy will be conducted by Jay Rambo from 2:00 to 5:00 pm on Saturday, November 5 at the home of Doug and Kathy Shipman, 203 Perfect Moment Drive, Durham, NC 27713. For more information or to leave a note of condolence, go to www.wakefuneral.com

Patricia June (&#8220;June&#8221;) Shipman entered eternity and the presence of her Savior on Sunday, October 9, 2016 at The Oaks at Mayview in Raleigh, NC after experiencing a series of strokes. She was 84 years old. June was born on June 3,... View Obituary & Service Information

The family of Patricia (June) Shipman created this Life Tributes page to make it easy to share your memories.