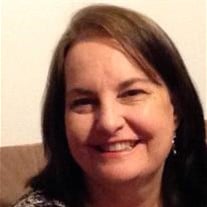 Patricia Lynn Hays of Cary, 60, passed away on April 26, 2016 in Raleigh, NC. Funeral service and remembrance will be held at St. Andrew’s Catholic Church on Friday, April 29th at 10:00 AM. Patricia was born in Independence, Iowa to Richard Henry Stiles and Margaret Lorraine Doyle on June 30, 1955. She attended Boca Raton High School where she met her devoted husband of 42 years, Michael Richard Hays, at the corner bus stop. They married on March 23, 1974 and had a Daughter, Sarah Elizabeth Hays (‘81) and a Son, Ryan Richard Hays (‘82). Her whole life, she never missed and was always the loudest cheerleader at her daughter’s games. In addition, she was diehard fan of the Apex H.S’. Cougars, NC State’s Wolfpack and Chicago’s Cubs. She enjoyed taking photos with family, watching Jeopardy and gardening with her son and collecting books and antiques with her husband. She loved all things beagle related and was everyone’s number #1 Facebook follower. She worked for Southern Bell, IBM, and the Capital City Club from which she retired, but at one time was also a florist, realtor, and property manager. Patricia is preceded in death by her Father, Richard Stiles, Mother, M. Lorraine Stiles, Grandparents Hank and Lottie Stiles and John and Elizabeth Doyle and her six beloved beagles (Misty, Peaches, Spunky, Goochie, Cookie, and Snickers). Patricia is survived by her Husband, Michael Hays, Daughter, Sarah Hays, Son, Ryan Hays, beagle, Peanut; Sisters, Diane Papke and Jackie Stiles; Brothers, Richard, Chris and Steve Stiles; Mother-in-law, Maxine Hays, Father-in-law, G. Richard Hays, Brother-in-laws, Mark and Matt Hays, Sister-in-law, Mary Jo Braisted, Daughter-in-law, Constanza Suarez; nieces, nephews, cousins and friends, especially the Ross family. Patricia was a devote Irish Catholic and attended mass every Sunday with her husband. She always lived by a philosophy that it was better to give, than to receive. Above all, her world and happiness revolved around her family. Nothing brought her more joy than when her family was together. “When you look at the brightest star or the fullest moon, that will be me” – Patricia Hays

Patricia Lynn Hays of Cary, 60, passed away on April 26, 2016 in Raleigh, NC. Funeral service and remembrance will be held at St. Andrew&#8217;s Catholic Church on Friday, April 29th at 10:00 AM. Patricia was born in Independence, Iowa to Richard... View Obituary & Service Information

The family of Patricia Lynn Hays created this Life Tributes page to make it easy to share your memories.

Send flowers to the Hays family.