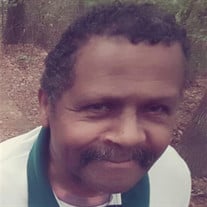 November 1 and 17, 1935 - April 11, 2017 Norman Hugo Johnson, of Apex, North Carolina, passed away on Tuesday, April 11, at the age of 81. Norman was born the youngest of two children to parents Norman and Gwelda Winfree (nee Johnson) on November 17th, 1935 in Short Pump, Virginia. He had two birthdays; as the 1st of the month was the standard issued government birthday that many southern black children in the 1930’s were given on the first day of the month of birth, and the 17th - Gwelda was adamant that was the day her baby boy was born. He was raised to have a ridiculously solid work ethic and to leave everyone he connected with feeling a little better about themselves. Norman started his young hustle with a paper route that provided him with so much cash, he often boasted that certain adults in his family would come to him for money. His Social Activist mother Gwelda, relocated to New Jersey and following a short stint in the Navy, Norman joined her up north. As lore tells it, a lovely model/dancer from Elizabeth, named Carole Fleming met Gwelda, fell in love with her, and was determined to make her family. Carole saw and was enamored a picture of and pocketed the picture of the handsome sailor and while he was home on leave, fate made certain they meet. Carole and Norman fell in love and married July 23, 1960. In the 60’s Norman joined the grocery industry, working for Wakefern Food Corporation, but he knew he was destined to make more of an impact on the community. In the early 1970s, Norman forged his passion for Civic Responsibility and his love for making black people see their beauty, he opened the doors to Nicole’s Beauty and Barber Supply in Montclair New Jersey. For thirty years, Nicole’s was a safe haven for all things involving self-care within the black community in Essex County. He was known for supplying most of North Jersey’s greatest celebrities with their hair care needs. The walls were graffitied with quotes, positive words and documented connections and break ups of local youth. Norman was affectionately called “Mr. Nicole”; it was never uncommon to enter the store and find him to engaged in deep intellectual stimulating conversation with local politicians, educators, community activists, other business folks, and young people - often hanging on his every word. In the 90s, Norman closed the doors on Nicole’s and at the age of 57 launched yet a new career working for the Post Office. Norman never met a stranger, he spoke with such sincerity and passion when it came to black Americans learning to love themselves in a time where black pride was often shunned. He devoted himself to educating others and was determined to make the world a more beautiful place. Norman is survived by his daughter, Nicole Cush, his granddaughter Kyrie Antoinette, and sons Mark Johnson and Marcqus Johnson. He is preceded in death by his loving wife of 56 years, Carole, his parents, Norman and Gwelda, and his sister, Dorothy. The Memorial Service will take place at Wake Memorial Park Cemetery, 7002 Green Hope School Rd, Cary, NC 27519, on Friday, April 14, at 11:00 am and friends and family are invited to attend a gathering at the home of Donald and Nicole Cush shortly thereafter.

November 1 and 17, 1935 - April 11, 2017 Norman Hugo Johnson, of Apex, North Carolina, passed away on Tuesday, April 11, at the age of 81. Norman was born the youngest of two children to parents Norman and Gwelda Winfree (nee Johnson) on November... View Obituary & Service Information

The family of Norman Hugo Johnson created this Life Tributes page to make it easy to share your memories.