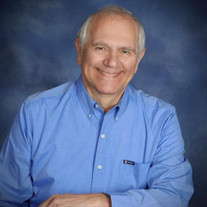 Nicholas John Sabin, Jr. (Nick), age 80, of Apex, North Carolina passed away peacefully in his sleep at home on March 15, 2021. Nick was born July 22nd, 1940 to the late Nicholas John Sr. and Olga Cutney. He and Joanne Margaret Fredey married in April 1964, and were blessed with two children, Nicholas Sabin, III (Julia) of Staunton, VA, and Gregory Sabin (Debbie) of Havelock, NC, as well as his chosen daughter Anita Morgan of Holly Springs, NC. His spirit lives on through his grandchildren, Rain, Ryan, and Jessica Sabin; Gregory II and Sierra Sabin; and chosen grandson, Cole Morgan. He was preceded in death by his brother, Thomas Sabin. After graduating from McKeesport High School, PA, Nick attended Kenyon College on a full scholarship, where he earned a B.A. in Biology with a minor in Chemistry in 1962. He then entered the U.S. Air Force and received additional education in electrical engineering at Keesler Technical Training Center. He served four years of active-duty service as a Communications Electronics Officer and received the rank of Captain. He worked 30 years as a Weapons System Analyst at Johns Hopkins University Applied Physics Lab where he wrote the technical launch procedures for submarine missiles. He retired in 1998 to become a full-time husband, dad, and grandpa, and to focus on his hobbies. Nick enjoyed traveling around the world, but as everyone knows, his favorite place was Disney World. He was passionate about reading, especially Roman history, woodworking, and crafting with his 3D printer. He was known for his kindness, his wit, his sweet nature and smile, and he will be missed by all who knew and loved him.

The family of Nicholas John Sabin created this Life Tributes page to make it easy to share your memories.

Send flowers to the Sabin family.