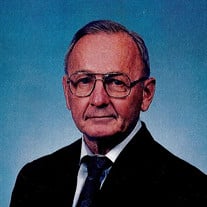 Nathan Boileau Marple IV, 88, was born on September 18, 1927 in Portland, Oregon, to the late Mildred Fisher Marple and Nathan B. Marple III. He passed away on February 1, 2016. He was raised on a farm near Columbus, Ohio. Nate received a Bachelor’s Degree in Physics from Kenyon College and a Master’s Degree in Electrical Engineering from Columbia University. In his 48-year career, Nate specialized in research and design of radar systems. He retired from XonTech, Inc. Nate and his wife of 18 years, Bonnie Brown Marple, lived in Durham, NC. In his younger years, Nate was an Eagle Scout, an avid hiker, and a member of the Adirondack Mountain Club. He hiked all 46 of the 4000-foot peaks in the Adirondacks and was the 413th person out of 9,000 to do so. During retirement, Nate loved to travel and enjoyed trips with Bonnie to 56 countries. He was a Member of the Golden K Kiwanis Club in Chapel Hill, NC. Using his warm personality and generous spirit, Nate volunteered his time to read to elementary school students and teach physics in high schools. Nate will now be with his twin brother Dudley Tyng Fisher Marple who passed away July 4, 2014. He is predeceased by his first wife Wanda Marple and his cousins Marion Abel and Michael Trostel. In addition to his wife Bonnie, Nate is survived by his cousins Lou Trostel, Anne James, Allen Marple, Harriet Plehn, Sara Templeman and Tony Marple. He is also survived by 9 adult stepchildren, Mark Schneider, Jeff Schneider, Mark Insley, Julie Insley, Paul Insley, Jamie Insley, Missy Winslow, Janet Insley and Suzy Nisbet. Also remembered is his beloved Yorkshire Terrier Lizzie, who passed away in December 2015. The family will receive visitors on Friday, February 5, 2016, from 6:00 pm to 8:00 pm at Faithful Hearts, 600 Gathering Park Circle, Suite 103, Cary, NC 27519. A memorial and burial service will be held at a later date in Columbus, OH.

Nathan Boileau Marple IV, 88, was born on September 18, 1927 in Portland, Oregon, to the late Mildred Fisher Marple and Nathan B. Marple III. He passed away on February 1, 2016. He was raised on a farm near Columbus, Ohio. Nate received a Bachelor&#8217;s... View Obituary & Service Information

The family of Nathan Boileau Marple IV created this Life Tributes page to make it easy to share your memories.

Send flowers to the Marple family.