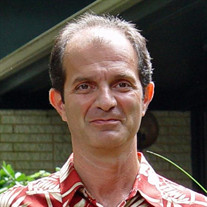 Murat Cin, 56, of Cary passed away unexpectedly on Sunday, July 3, 2016. Beloved husband, father, and friend, he will be missed by many. Murat was born in Istanbul, Turkey, on December 18, 1959 to Mehmet and Melahat Cin. He is survived by his wife of 22 years Edith Cowper and daughters Amelia and Claire Cin of the home; by his mother, sister Meral Cin Uz (Levant), brother Turgut Cin (Gulbin), nephew Berke Uz, and niece Zeynep Cin, all of Turkey; and by brothers-in-law Ottis Cowper (Gail) of Cary and Bill Cowper of Gatesville, NC, nephew George Cowper, and niece Sara Cowper. Murat received a degree in Mechanical Engineering from Yildiz Technical University and an MBA from Istanbul University School of Business and work many years as Head of Purchasing at Deva Holding in Turkey. He met Edith while studying English at the School for International Training in Brattleboro, VT, where she was a graduate student in Teaching English as a Second Language. Their relationship led Edith to teach a year in Istanbul with Murat, after which he followed her back to the U.S. where they later married. Although proud of his Turkish heritage, Murat became a U.S. citizen in 2000 shortly before the birth of their first child. His family and friends knew him to be an especially devoted father. His hard work, plans, and dreams were selfless and revolved around his family, especially “his girls”, Amelia and Claire. He was the biggest fan of their dancing and music and was charmed by the accomplished young women that they had become. He also enjoyed cooking, particularly traditional Turkish dishes. His extended family benefited from the blending of the Turkish and American cultures he loved. Murat worked for Stone Truck Parts in the Purchasing Department for over 10 years. He had many good friends at work, and all enjoyed his stories of communication challenges with clients confused by his Turkish accent and he by their southern drawl. The family will receive friends on Saturday, July 9, 2016 from 1:00 p.m. to 2:00 p.m. at The Matthews House, 317 W Chatham St, Cary, NC 27511. A Celebration of Life will follow at 2:00 p.m., also at The Matthews House. In lieu of flowers, donations may be made to Longleaf School of the Arts, 207 E. Hargett St., Raleigh, NC 27601 Attn: Denise Brown or Martin Middle School Band program, c/o Martin PTA, 1701 Ridge Road, Raleigh, NC, 27607 (Pay to Martin MS PTA). Online condolences may be made to www.wakefuneral.com

Murat Cin, 56, of Cary passed away unexpectedly on Sunday, July 3, 2016. Beloved husband, father, and friend, he will be missed by many. Murat was born in Istanbul, Turkey, on December 18, 1959 to Mehmet and Melahat Cin. He is survived by... View Obituary & Service Information

The family of Murat Cin created this Life Tributes page to make it easy to share your memories.

Murat Cin, 56, of Cary passed away unexpectedly on Sunday, July...

Send flowers to the Cin family.