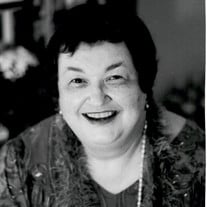 Psychologist. Dr. Mildred Wight Goldstone (Millie) died at the age of 76 at HeartFields of Cary in Cary, North Carolina after a long illness. Millie was born in Batavia, NY on November 11, 1942 to the late Mary Jane Wight and Wayne Wight. She spent her youth in Batavia and Rochester, NY. Millie had a lifelong love of music and at one time, aspired to be a professional pianist. Millie received a perfect score on the Seashore Music Aptitude test as a young girl. Millie also loved other forms of art (opera, symphony, ballet and the visual arts) and was a season ticket holder at the Kennedy Center for the Performing Arts in Washington, DC for several years. She had a special affinity for opera and was able to speak with her favorite opera singer via telephone, Placido Domingo. This was a highlight for her. Millie attended Hobart and William Smith College in Geneva, NY. She later moved with her husband, Robert Carl Kammholz, to the Washington, DC area where she received her BA, MA and PhD in Psychology from the George Washington University. Millie worked at St. Elizabeth’s Hospital in Washington, DC as an intern and a psychologist. After receiving her PhD in 1975, Millie worked as a psychologist in private practice. In 1982, Millie began her own private practice in Washington, DC and Bethesda, Maryland and operated this practice for over thirty years. Millie was active in the professional psychological community in Washington, DC; Maryland and Northern Virginia and held offices of the DCPA, WSPP and WPSP. Millie’s research on the psychology of the opera “La Traviata” was published and was a topic she presented on many times professionally. Millie also became a Rieke Master, Hypnotherapist and was working toward her Healing Touch license at the time of her retirement. She retired from private practice in October 2015 to North Carolina. Millie married Robert Carl Kammholz in 1961 and had two sons, Mark and Bradley Kammholz. In 1971, Millie married Robert Lee Goldstone and had one daughter, Heather Goldstone Carter. Millie was known for her infectious smile and equally infectious laugh and quick (sometimes inappropriate) wit. Millie said the things that everyone wanted to say but did not. She was a devoted mother and grandmother to her three children and grandchildren, Mark Kammholz, Brad Kammholz and Heather Goldstone Carter and Brennan and Maddie Kammholz and Sarah Carter. She will be remembered by her grandchildren as the funny, eccentric grandma who always made her grandchildren giggle with laughter with her ghost stories, her fun gifts and healing Rieke. Millie was also generous to several charitable organizations throughout her life including those that served children, persons with functional and access needs and the environment. Millie was kind to the people she encountered in her daily life, giving them each little gifts at the holidays and always wanting to show her appreciation for their hard work and the assistance they provided to her. However, Millie also had a “tough” side where she fought for the “underdog” and was accepting of all people regardless of his/her background, ethnicity, faith, etc. She taught her children to treat everyone with respect and kindness regardless of his/her life situation or past. When encountered with a challenge, she faced it head on and did what she felt was needed to protect herself and her family. Millie’s legacy is to spread and express love to everyone. Millie is survived by her three sisters, Mary Jane Pia (Joe); Marjorie Russer (Richard) and Muriel Rouch as well as several nieces and nephews. She is also survived by her children and grandchildren. Her sons, Mark Kammholz of Hagerstown, MD; Brad Kammholz and wife, Karen, and their two children, Brennan and Maddie Kammholz of Fairport, NY; and her daughter Heather Goldstone Carter and husband, Scott, and their child, Sarah Carter of Cary, NC. Millie was predeceased by her husbands, Robert Carl Kammholz and Robert Lee Goldstone, as well as her brother, Warren Wight. The family would like to express their admiration, thanks and love to the caring and attentive staff at HeartFields at Cary and Transitions LifeCare. The family would also like to thank the staff at Wake Funeral and Cremation Services for their professionalism, accommodations and kindness during this difficult time. In lieu of flowers, memorial donations may be made in Millie’s name to: Transitions LifeCare and Hospice https://transitionslifecare.org/donate/ 250 Hospice Circle, Raleigh, NC 27607. Funeral services were held in Rochester, NY on Friday, July 26, 2019.

Psychologist. Dr. Mildred Wight Goldstone (Millie) died at the age of 76 at HeartFields of Cary in Cary, North Carolina after a long illness. Millie was born in Batavia, NY on November 11, 1942 to the late Mary Jane Wight and Wayne Wight. She... View Obituary & Service Information

The family of Mildred Wight Goldstone created this Life Tributes page to make it easy to share your memories.

Send flowers to the Goldstone family.