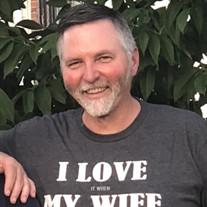 Michael John Zimmerman at the young age of 58, passed away from throat cancer on Tuesday November 23rd at Duke Hospital in Durham, NC surrounded by his loving wife Wendy and his two children Brock and Baileigh. Michael was born in Vicksburg Michigan September 12th, 1963 to Theodore and Mary Zimmerman. As he was growing up, he enjoyed spending his summers fishing at Mud Lake almost everyday as a child. In the winters he spent his time deer hunting with his brothers and father. Michael served in the US Army and told amazing stories of his times in Alaska. Michael started his career at Upjohn in Kalamazoo as a Chemical Operator in August of 1991. Michael met his wife Wendy while shooting pool at a local establishment and a good friend introduced them and the rest is history. They got married on May 18th, 1991. His first son Brock was born on December 2nd, 1992. Followed by his daughter Baileigh January 12th, 1994. Growing up his children have fond memories of fishing with him at Sunset Lake, him coaching our T-Ball and Basketball Team, watching scary movies, and playing video games in our living room. He enjoyed visiting his favorite in-laws Gary & Rita Dempsey in Texas where he would go golfing with the guys, have happy hour with the many friends he made and always go on a deep-sea fishing trip and enjoy big shrimp from Dirty Als’. Michael enjoyed many vacations with his wife Wendy to Cancun, Jamaica, and many other tropical paradises throughout the years (He always said in his times of illness he was blessed to have taken the time to travel and enjoy his experiences over the years and not wait for retirement). In 2007, his career with Pfizer took him and his family to St. Louis. Michael was so close with his in laws (and such a talented handy man) that over the years he finished 3 separate basements for them to live with the family in the summertime in Kalamazoo, Ann Arbor, and finally in St. Louis. Shortly after the move, he took up golfing and it has been his passion right up until the end; he truly excelled on the Pfizer League and with the many friends he got out with each weekend. You could always find him golfing on weekends or watching a NASCAR race on Sundays while enjoying some wings and Crown Royal. Michael had so much ambition when it came to his career, he worked his way up through the company over the years from Technician to Manager in St. Louis. He loved managing and he loved helping his direct reports reach their full potential. He loved working for Pfizer and making a real impact working on pharmaceuticals that would make a difference in people’s lives. In 2020, he decided it was time to move his career with Pfizer to Chapel Hill, NC as a Research Scientist for warmer weather and the ability to golf year-round. He loved to laugh and anyone that knew him could never forget his witty humor and dad jokes. In August of 2021, he was able to take one final road trip in his red Chevy Camaro (his dream car he was finally able to purchase in January 2021) to Michigan where he was able to see all his old work colleagues and friends from over the years. During that trip he was able to fish in a bass fishing tournament with his dear brothers Ken and Steve at Austin Lake. Close to the end, his children moved to North Carolina to be nearby. He enjoyed watching Squid Games with his son, Brock. The one thing that always stayed with him through the years and treatments was his sense of humor, his daughter Baileigh enjoyed laughing and watching Family Feud with him till the end. He spent his final weeks with his brother-in-law Jack Dempsey and friend Phil making fond memories on the golf course. Michaels battle with cancer started in Kalamazoo in 2004 where he was diagnosed with stage 4 throat cancer. Nearly 13 years later he was diagnosed again with the same throat cancer in St. Louis, MO. Over the years with family by his side, he battled with numerous tumors doing surgeries, chemotherapy, and radiation. In the end, Michael’s tumor was inoperable although he did fight till the very end as he was undergoing immunotherapy treatments. In the very end the tumor was too aggressive and too large to overcome. Michael passed peacefully in the hospital with family by his side just the way he wanted it. He is survived by his wife of 30 years, Wendy Dempsey-Zimmerman, their 2 children son Brock Michael Zimmerman and daughter Baileigh Alyssa Zimmerman and his beloved dachshund Buddy Zimmerman. He has another daughter Mindy Lynn Zimmerman from his first marriage. He is also survived by his brothers Kenneth (Melody) Zimmerman in Goodrich, MI and Steve Zimmerman in Vicksburg MI. He is preceded in death by his parents Theodore and Mary Zimmerman of Vicksburg, MI. The family will be planning a Celebration of Life in the Spring of 2022 in Michigan. For details on the celebration of life contact [email protected] Michael had a big place in his heart for helping people and making a difference, so no other family has to go through what he did. Michael had amazing care at Duke University Hospital, instead of sending flowers the family would ask his friends and family to donate to the Duke Cancer Institute “DCI Head and Neck Cancers Fund” in memory of him and in honor of the amazing care that he received under Dr. Walter Lee (ENT, Surgical Oncologist) , Dr. David Brizel (Radiation Oncologist) and Dr. Jennifer Choe (Chemo/Immunotherapy Oncologist) and to help the future of patients and families battling this illness. https://www.gifts.duke.edu/dci

Michael John Zimmerman at the young age of 58, passed away from throat cancer on Tuesday November 23rd at Duke Hospital in Durham, NC surrounded by his loving wife Wendy and his two children Brock and Baileigh. Michael was born in Vicksburg... View Obituary & Service Information

The family of Michael John Zimmerman created this Life Tributes page to make it easy to share your memories.

Michael John Zimmerman at the young age of 58, passed away from...

Send flowers to the Zimmerman family.