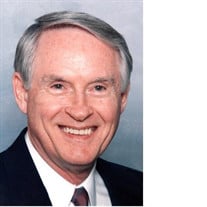 Early July 2, 2018, Michael James Skehan completed his journey in this life and began his next. Born July 29,1937 in Cleveland, OH to Clement and Margaret Skehan, he was the youngest of four children. He joins his brother Clem, while his sister Eileen Lombardo and brother Howard are still with us. Michael met and married the love of his life, Patricia Lynn Gilbride in 1963, and she remained by his side until the end. They had three children together, a son Gary Michael, and two daughters, Kelly Ann Bitz and Shannon Aileen Fuerst. Kelly and Shannon blessed him with 4 wonderful grandchildren, Marley Kristin, Conor Mathew, Mollie Lynn and Erin Marie. A man of immense faith, he cherished his family to the end and will be dearly missed by all. Michael was a proud graduate of Case Western Reserve University, and was the first in his family to graduate from college. He then spent several years in the United States Air Force before his discharge in 1962. Not long after, he met Pat and their adventure together began. A career in mechanical engineering at Goodyear in Akron, OH, took a surprising turn to sales for one of their subsidiaries, and they moved the family to Michigan. They spent 15 years there, until settling for good in North Carolina in 1985. He remained in sales, and devoted a considerable amount of his time to his church, St. Andrew The Apostle in Apex, NC and also volunteered in the community; Transitions LifeCare (formerly Hospice of Wake County), Catholic Parish Outreach and Triangle Reading Service were some of his favorites. He wanted to make a difference, and he certainly did to the loving family he leaves behind. So we ask, in lieu of flowers, that contributions be made in his name to Transitions LifeCare in Wake County, an organization he was proud to be a part of for many years. https://transitionslifecare.org/ A Funeral Mass honoring Michael will be held Wednesday, July 11, 2018 at 11:00 am at St. Andrew The Apostle Catholic Church, 3008 Old Raleigh Rd, Apex, NC 27502. The family will receive friends immediately following the service.

Early July 2, 2018, Michael James Skehan completed his journey in this life and began his next. Born July 29,1937 in Cleveland, OH to Clement and Margaret Skehan, he was the youngest of four children. He joins his brother Clem, while his sister... View Obituary & Service Information

The family of Michael James Skehan created this Life Tributes page to make it easy to share your memories.

Send flowers to the Skehan family.