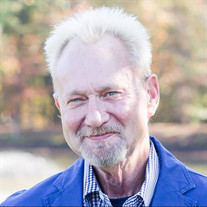 Michael Dean Chadwick, aka “Big Daddy” was larger than life. Writing an obituary for him feels like trying to put together a 10,000 piece puzzle in 30 minutes. There are no words to express the impact he had on the lives of everyone he met. He was such a generous man with an enormous heart. Michael Dean was born in 1953 in Washington, D.C. He gave his life to Jesus at a young age. He lived at home with his mother and father until his dad passed away when he was 12. He had a troublesome adolescence that culminated in him leaving home at age 15. Michael Dean graduated in 1971 from Oxon Hill High School and traveled around working odd jobs. In 1977, he met Janice and told her that he was going to marry her the first day they met. Eight months later, they were married and their first child Kelly Anne was born in 1979. The family continued to grow with the birth of Katie in 1981 and Michael Dean II in 1984. Michael Dean got his start in the building industry with Ryan homes in 1979. In true MDC fashion, he went straight up the ladder and began a successful career as a builder. He was an entrepreneur in every sense of the word and never did anything small. Despite the lack of college education or even knowing how to hang a shelf, he started Chadwick Builders in 1984 and built thousands of houses over the years. In his early 30s, he re-dedicated his life to Jesus and started attending Heritage Baptist Church in Woodbridge, Va. He was always paying it forward in a big way. Because of his past experiences, he wanted to help other teenagers and impact their future. His idea was ambitious and many people told him he would never be able to get it done. Despite the odds, one year later in 1986, with the help of Joe Gibbs (former Washington Redskins coach) and countless others, Chadwick Builders built Youth for Tomorrow in Bristol, VA. This boys home is still operational today and has helped thousands of boys over the past 30+ years. He also did countless speaking engagements for Fellowship of Christian Athletes and other motivational talks throughout the years. In 1992, he lost his only son Michael Dean Chadwick II. He was 8 years old when he went to be with Jesus. The loss was devastating. Janice and Michael prayed for another child. A year later, they endured a miscarriage at 4 months. In 1994, God blessed them with the birth of their 3rd daughter Krista Nicole. Shortly after Krista's birth, Michael Dean moved his family to Raleigh, NC and went to work for a local builder. Despite the devastating losses and setbacks, MDC started his own company 1st American in Apex, NC. He sold it several years later and started land developing and speaking again. Katie gave him his first granddaughter Julia Shea with Blair Mitchell in 2001. Michael became a father figure to Blair and they developed a close bond that endured through the end of his life. Michael Dean introduced (and set up) Kelly and Geoff and they got married in 2002. Kelly and Geoff went on to give him three grandchildren- Seth Michael, Landon James and Savannah Grey. Michael was extremely influential helping Josh Hamilton work through the same issues that had plagued him in the past and get back to baseball. Josh married Katie and went on to give three more grandchildren- Sierra Elise, Michaela Grace, and Stella Faith. His youngest Krista married Dillon Brown in 2015 and on August 8, 2018, they welcomed their first son Chadwick Titus into this world. Big Daddy was diagnosed in June 2018 with stage 4 cancer. On November 1, 2018, he entered Heaven's gates. Family and friends were by his side until he passed into the arms of Jesus. His favorite verse was Philippians 3:13-14 “Brothers and sisters, I do not consider myself yet to have taken hold of it. But one thing I do: Forgetting what is behind and straining toward what is ahead,I press on toward the goal to win the prize for which God has called me heavenward in Christ Jesus.” Please join us as we celebrate his life on Wednesday at 2:00 at Hope Community Church in Apex. The graveside service will follow this celebration at Swift Creek Church at 9300 Penny Road, Raleigh, NC. In lieu of flowers, donations can be made to the “Friends of Michael Chadwick” fund.

Michael Dean Chadwick, aka &#8220;Big Daddy&#8221; was larger than life. Writing an obituary for him feels like trying to put together a 10,000 piece puzzle in 30 minutes. There are no words to express the impact he had on the lives of everyone... View Obituary & Service Information

The family of Michael Dean Chadwick created this Life Tributes page to make it easy to share your memories.

Michael Dean Chadwick, aka “Big Daddy” was larger than life....

Send flowers to the Chadwick family.