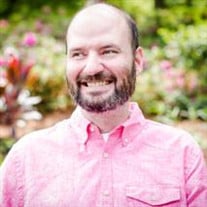 Michael S. Bereman born July 3, 1981 of Apex, NC passed away peacefully at home on March 17, 2021 surrounded by his loving wife, family and friends. Michael bravely battled Amyotrophic Lateral Sclerosis (ALS/Lou Gehrig's Disease) for 6 years. An Apex native, Michael attended AV Baucom Elementary, Apex Middle, and Apex High Schools (graduating class of 2000). While he was an avid athlete and sports fan, his greatest love was the game of basketball, playing from the age of 4 with his older brother Matthew all the way to varsity basketball at Apex High School, which was one of his fondest memories. His formative years were truly shaped by his “small town” community and playing sports which yielded relationships with friends, teachers and coaches that would last a lifetime. Michael was a lifelong Wolfpack fan, proudly earning his BS in Chemistry with a minor in Mathematics in 2004 and his PhD in Analytical Chemistry in 2009, both from NC State University. He would then continue to the University of Washington in Seattle for a postdoctoral position in the Genome Sciences department while he and wife Meagan enjoyed life as newlyweds in the Pacific Northwest for several years. A faculty position at NC State University in 2013 would then bring Michael back to the east coast and his alma mater to start his dream job in the College of Sciences and begin his own family where he was raised. Michael’s doctoral and postdoctoral research was shaped by biomarker research for many diseases, but it wasn’t until his own diagnosis of ALS in 2015 would his focus forever be changed. Michael quickly became a giant in the field of ALS research and enjoyed sharing his passion for science with his students, where their work together would be published in top tier journals. His collaborations as a tenured Associate Professor and University Faculty Scholar would forge relationships around the world. He was awarded prestigious grants from the Department of Defense, the national ALS Association and other elite universities and research institutions to continue his pursuit of novel and dedicated research to ultimately find a cure for ALS. The Bereman’s family motto was shaped by Coach Jim Valvano’s famous quote, “Don’t give up. Don’t ever give up!” and Michael lived by these words. He worked furiously right up to a few days before his passing by utilizing his eye gaze computer technology. Michael’s passion and drive for life was evident in all that he did and all whom he loved and held close in his life. May we all continue to never give up and fight with each earthly breath to make a difference and change the world, just as he did. We are forever grateful for his mark left on our hearts, and the legacy left in his beloved children Mason and Millie who will surely follow in their Daddy’s footsteps of always being “Bereman Brave”. Michael is survived by his loving wife Meagan Myers Bereman, children Michael Mason, and Millicent Middleton, adoring parents Dr. Robert Deane Bereman and Barbara Jo Melbourne Bereman of Apex and beloved brother Dr. R. Matthew Bereman (Julie) and nieces Madelyn Mae and Aubrey Rose of Fuquay-Varina. Due to covid restrictions, a private ceremony will be held at Apex United Methodist Church. An outdoor celebration of life is planned for June 26, 2021. All who loved Michael are invited to participate in our summer date. Donations in honor of Michael’s life well lived can be made to the ALS Association of NC, or ALS TDI (ALS Therapy Development Institute). ALS Association http://webnc.alsa.org/ 4 N Blount St #200, Raleigh, NC 27601 ALS TDI https://www.als.net/donate/ 480 Arsenal Street Suite 201 Watertown, MA 02472

The family of Michael Seth Melbourne Bereman created this Life Tributes page to make it easy to share your memories.

Send flowers to the Bereman family.