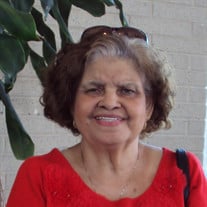 Mary Medford of Cary, North Carolina, passed away on Saturday, December 9, 2017 at the age of 81, in her home at Highland Commons Court. Mary was born on Christmas day in 1935, to Malcolm and Lucille Evelyn, on the Caribbean island of Barbados. As a young girl she was an intelligent and driven student. She had an affinity for mathematics and a love for the English language. Mary had a naturally engaging personality that would light up a room. She participated in the Ms. Barbados beauty pageant and served as a matriarch for her younger siblings. A Billy Graham Crusade in Barbados changed her life. She became a devout woman of faith, and went on to attend Bible College. Mary worked as a bookkeeper before relocating to the United States in 1969. Establishing herself in New York City, Mary started a successful career as a Supervisor of Catalog Sales at the Metropolitan Museum of Art. She was beloved by her coworkers and would serve for twenty years and retire as an honorable and well respected professional. She subsequently relocated, with her family, to North Carolina. Mary was an incredible woman with an unwavering faith and a sincere love for the Lord. She was known for her cheerful spirit, strength, generosity, and willingness to listen and counsel anyone in need of encouragement or prayer. Her life of service to others exemplified Christ’s commandment to love God and love your neighbor. Mary Medford was dedicated to the Miller Memorial Church of the Nazarene in Brooklyn, where she was very active in the “Willing Workers” women’s ministry. She was also actively involved at Grace Bible Fellowship, where she made many lasting friendships. Mary had a hidden talent. She was a master at crossword puzzles and would engage her entire family in her favorite hobby. She was also known for her cooking, especially her macaroni and cheese. She would feed whoever showed up in her home and always had a home full of friends and neighbors. There was never any doubt that after God, the most important people in Mary’s life were her children and grandchildren, Mary is survived by her children, Bawana Thompson, Cheryl Rouse, and Carol Hall and eight grandchildren: Kevin Thompson, Jordan Rouse, Kaylin Thompson, Chloe Hall, David Thompson Jr., Monet Hall, Benjamin Rouse and Elaine Rouse; and her siblings Victor, Marlene, Lennox, Yvonne, Grantley and Francia. Mary was preceded in death by her parents Malcolm and Lucille Evelyn, her sisters Joan Worrell and Phyllis Alley and her son Bernard Medford Jr.

Mary Medford of Cary, North Carolina, passed away on Saturday, December 9, 2017 at the age of 81, in her home at Highland Commons Court. Mary was born on Christmas day in 1935, to Malcolm and Lucille Evelyn, on the Caribbean island of Barbados.... View Obituary & Service Information

The family of Mary Elaine Medford created this Life Tributes page to make it easy to share your memories.

Mary Medford of Cary, North Carolina, passed away on Saturday,...

Send flowers to the Medford family.