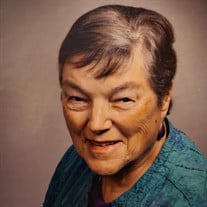 Martha Ford Waters, 80, social worker, spiritual leader and lifelong seeker of justice, died February 8 at her home in Cary, N.C. She spent her last days surrounded by friends and family, singing, praying, and sharing stories. Martha was born to Howard C. and Bonnie Willis Ford of Penland, N.C. She grew up in the Blue Ridge Mountains of North Carolina and was always a mountain woman at heart. Her godmother, Lucy Morgan, was the founder of the Penland School of Craft, a national center for craft education – a fact of which Martha was very proud. Martha attended The University of North Carolina at Greensboro, then called the Women’s College of UNC, graduating with a BA in sociology and psychology in 1963. She received a master of social work degree from the UNC School of Social Work in 1980. She then went to work for Wake County Child and Family Services, serving as director of the newly created Willie M program for violent and severely disturbed children. In 1996, Martha became the associate director for field instruction at the UNC School for Social Work until she retired in 2002. Throughout her life, Martha worked tirelessly for justice. In the early 1960s, Martha became involved in Civil Rights causes, marching for racial justice, and befriending her classmates who were the first to desegregate UNC Women’s College. An active member of the Episcopal Church, Martha was a leader in the Church’s efforts to combat racism. She formed a group of volunteers who she trained in the Church’s anti-racism program called Seeing the Face of God. The group presented this program throughout North Carolina for more than a decade. Martha continued to work for racial justice throughout her life. A devoted member of St. Paul’s Episcopal Church in Cary, Martha was a Eucharistic minister and folk choir member. Her tenor voice contributed beauty and resonance to the worship experience. For more than two decades, Martha served as a mentor in Education for Ministry (EFM), a four year course of study that teaches how to connect faith to daily life. Martha was an active volunteer for Kairos, a volunteer prison ministry, working with inmates at the North Carolina Correctional Institution for Women. This lay-led organization provided inmates a powerful weekend experience of unconditional love, delivering the message of Christianity without judgment to those most in need. In 1995, Martha completed a two-year program at Shalem Institute for Spiritual Formation. During the last 27 years of her life, Martha served as a spiritual director for dozens of lay and ordained people from various faiths, walking with them on their spiritual journeys. Her gift of listening and her ability to provide comfort and support were essential in this work throughout her life. Through her experiences in racial justice, social work and at church, Martha made many friends she held dear throughout her life. She was cherished for her fairness, loyalty and dry wit. Martha is survived by her wife, Georgie Curry Gracie; brother William Ford (Suzanne); three children and seven grandchildren. The family will receive visitors on Thursday, February 24 from 6 until 7 pm at the Herb Young Community Center in the Eagle Room at 101 Wilkinson Avenue, Cary. Starting at 7 pm, there will be an hour dedicated to sharing memories and stories about Martha. Her funeral will be Saturday, February 26 at 2 pm at St. Paul’s Episcopal Church, 221 Union Street, Cary, followed by an inurnment service at the church’s columbarium. Donations in memory of Martha may be made to Dorcas Ministries–Christian Community in Action, dorcascary.org. Arrangements are by Wake Funeral and Cremation Services, Cary.

The family of Martha Ford Waters created this Life Tributes page to make it easy to share your memories.

Send flowers to the Waters family.