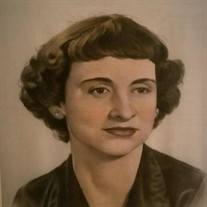 OBIT MARIE LANGLEY RUFFIN (Thelma) Marie Langley Ruffin died on December 1, 2020, of Covid-19. Since 2016, she was cared for at the Oaks at Mayview, Raleigh, until she died. Thelma Marie Langley was born on July 12, 1925. She disliked the... View Obituary & Service Information

The family of Marie Langley Ruffin created this Life Tributes page to make it easy to share your memories.

Send flowers to the Ruffin family.