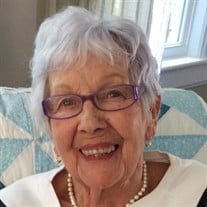 On December 19, 2021, Marguerite departed this earthly life in her 96th year to join the angels and saints in her eternal home with the Lord. Her final days were spent at her home in Durham, NC surrounded by loving family members and devoted... View Obituary & Service Information

The family of Marguerite Lee Canning created this Life Tributes page to make it easy to share your memories.

Send flowers to the Canning family.