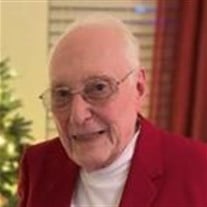 Robert E. Vermette (Bob), age 82, died December 27, 2019 at home after a long battle with melanoma and pancreatic cancer. Bob is survived by his wife of 60 years, Alice, five adult children: Nadine Vermette-Moyer (Michael), Julie Vermette Graham, Mark E. Vermette (Beth), Krista Marie Kaminski (David), and Michael R. Vermette (Tamara). He also leaves behind 11 grandchildren and six great grandchildren as well as his sister M. Edna, brother-in-law John Greene and their family. Both his parents Euclid and Marie Vermette and his brother-in-law Edward F. Sherer preceded Bob in death. Bob grew up in Rhode Island where he attended grade school through college; he learned to work on cars from his father, who owned a local Oldsmobile automobile dealership. As he grew older, his scientific and engineering interests expanded. Bob earned a B.S. in Electrical Engineering from the University of Rhode Island in 1958, a Master of Management Engineering Degree from George Washington University and attended the Army War College. He was assigned to Redstone Arsenal in Huntsville, AL where he began his military career in the Army Ordinance Corps, was mentored by Werner Von Braun’s team of scientists and joined the work to pioneer the Space Program. Bob served 22 years active duty in the U.S. Army and retired as a LTC, having earned several medals including the Meritorious Service Medal and Legion of Merit. He was also a veteran of the Vietnam War where he was awarded his Republic of Vietnam Gallantry Cross w/ Bronze Star and Republic of Vietnam Gallantry Cross Unit Citation w/ Palms (2d Award). Throughout his service, Bob led technical initiatives that laid the foundations for core technology systems that would transform both military and civilian worlds. His work on rocketry contributed to the Saturn systems that brought humans to the moon. He led key initiatives yielding the submarine-launched ballistic missile and cruise missile systems. Bob led the army’s research on lasers that was the backbone for modern projectile laser guidance, while developing advanced radar signaling to more safely manage both military and civilian air traffic. As a military diplomat, he coordinated R&D with European allies in the joint development of a new generation of air defense technologies. After retiring from the military, Bob worked for many years as a corporate consultant where he continued his career working on contracts with the Department of Defense. Upon retirement from his second career in the private sector, he (and Alice) returned home to Rhode Island for several years. In 2012, they relocated to Cary, NC to be closer to their children and grandchildren. Always both student and teacher, Bob began writing a book to share insights and lessons learned along this path. What he called “the unexpected life of a young aerospace engineer” was full of wisdom about teamwork among diverse people, the idiosyncratic nature of innovation, and the country that made his journey possible. His family and friends will see that book through to publication. In lieu of flowers, the family requests memorial contributions be made to UNC Lineberger Comprehensive Cancer Center. Checks may be made payable to: “UNC Lineberger” with Robert E. (Bob) Vermette in the memo line. Contributions can be made online at https://unclineberger.org/giving/ or checks may be mailed to the address below. UNC Medicine Development Attn: UNC Lineberger PO Box 1050 Chapel Hill, NC 27514 A service will be held this Friday, January 3, 2019 at 11:00 AM at St. Andrew the Apostle Catholic Church in Apex, North Carolina. A Mass will be held on August 17, 2020 at 12:45 pm at Arlington National Cemetery, Arlington, VA in the Old Post Chapel followed by his burial with Full Military Honors. Arrangements made by Wake Funeral and Cremation Services, Inc., Apex, North Carolina.

The family of LTC Robert E. Vermette created this Life Tributes page to make it easy to share your memories.