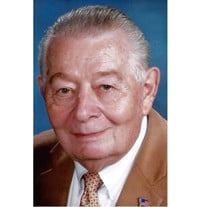 Levi Lee Ripperger, 86, of Holly Springs died peacefully on Tuesday, September 27, 2016 surrounded by his family. Mr. Ripperger was born to Clemons N. Ripperger and Orpha Smith Ripperger on April 21, 1930 in Lacona Iowa. His family moved to Oregon when Lee was 5 years old. He attended schools in Roseburg and Medford, Oregon and graduated from Medford High School in 1948. Lee joined the U S Army in February, 1951. Lee married his wife, Hilda Reams in 1953. He spent his entire career with F W Woolworth, managing stores in California and became District Manager for Utah and Arizona. In 1969, Lee was promoted to the executive office as Vice President of Research and Development in New York City. In 1980 he became the buyer of Toys and Books for Woolworth. Lee retired from his career in 1994. He is survived by his wife, Hilda Reams Ripperger; son: Brian L (Laurie) Ripperger of Ladera Ranch, CA; daughters: Debra R. (Christopher M) Hamilton of Williamsburg, VA and Linda Lee Ripperger of Johns Island, SC. He is also survived by his 6 grandchildren: Shawna (Hunter) Clendaniel, Kendall Hamilton, Jeffrey Hamilton, Kiley (Dexter) Decell, Justin Ripperger and Tyler Ripperger and 3 great grandchildren: Brinley, Reed and Ellie. A Celebration of his life will be at 11:00 am October 8, 2016 at Sunrise UMC, 5420 Sunset Lake Rd, Holly Springs, NC 27540. In lieu of flowers, memorials may be made to Sunrise UMC Building Fund, or to a charity of one’s choice. Online condolences may be made to www.wakefuneral.com

The family of Levi Lee Ripperger created this Life Tributes page to make it easy to share your memories.

Send flowers to the Ripperger family.