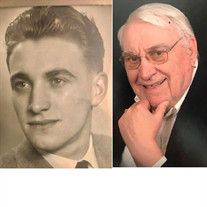 Not sure what to send?

Leo Josemans, 88 of Raleigh, North Carolina passed away peacefully while surrounded by family June 15, 2022. He was born on August 14, 1933 in Hilversum, Netherlands to Johannes Petrus Josemans and Adrianna Hendrika Maria Josemans van Zal. He graduated from Marquette University in Milwaukee, WI. He retired from Buehler Products after working as an Mechanical Engineer for over 50 years, during which time he was awarded 11 patents to his name. He was a very loving man devoted to his family and church. He will be missed and fondly remembered by all who knew him. Our deepest gratitude to REX Rehab and Nursing Care in Apex and to Transitions HospiceCare for their caring support. Leo is survived by his loving wife of 65 years - Maria “Riet” Josemans , Children; Bryan Josemans (JoAnn), Michael Josemans, Monique Fjeldheim (Terry), Randel Josemans (Dawn), Michele Fournier (Fred) 8 Grandchildren; Trey Weston, DeAnna Josemans, Garrett Josemans, Hunter Josemans, Nicole Josemans, Connor Josemans, Lexis Josemans, Colton Johnson and 4 Great Grandchildren. Brother - Roy Josemans of Austrailia, Sister - Rie Peters Josemans of Hilversum Netherlands. Leo was preceded in death by his brothers; Hans, Henk, Adriaan, Gerard and Sister Ina. Funeral services will be held at Saint Andrews The Apostle Church, 3008 Old Raleigh Rd, Apex, NC on July 1 at 11:00 a.m. with Father John Durbin officiating. Interment will be held at the columbarium at St Andrews. In Lieu of flowers, donations can be made to St. Andrews The Apostle Church or TransitionsLifeCare.org. The family welcomes friends to join them afterwards in the Fellowship Hall at Saint Andrews to visit and share memories of Leo.

The family of Leonardus Johannes Maria Josemans created this Life Tributes page to make it easy to share your memories.

Send flowers in honor of Leonardus.