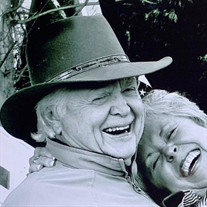 Kennith Russell Ott (born November 11, 1935) passed away on February 21, 2020. Ken was a true southern gentleman— kind, charming, hospitable, and one of the friendliest people you’d ever meet. Ken laughed easily and heartily, especially when he was laughing at himself. He loved a well cut suit, snazzy ties, anything Clemson, and wrist watches. Always on the lookout for a new watch, he’d comment, “That’s a good lookin’ watch. I may need to get me one of those!” Ken loved helping others, whether serving as a founding elder at Fellowship Bible Church in Roswell, Georgia, or teaching Sunday school and being a Sunday morning greeter at McConnell Memorial Baptist Church in Hiawassee, or being his dapper self in a tux, escorting the many guests to their seats during the Teas From the Heart ministry events. Helping others was Ken’s favorite thing about practicing law, especially when he could help widows and single mothers. He’d been the son of a single mother when he was young, and he always kept that soft spot. Ken liked corvettes. Really, he liked anything he could drive, steer, or pilot. Cars, boats, jet skis, motorcycles, golf carts, and single engine planes. Ken liked dogs, too. He rarely met a dog he didn’t like and he especially adored our family dogs. “You sure got a good one," he’d say while rubbing a velvety ear or patting a furry head. He always said if he hadn’t been an attorney, he’d have wanted to be a veterinarian. Ken is survived by his wife of sixty years, Phyllis Myers Ott, his one and only ever sweetheart. Phyllis was fourteen and Ken was eighteen when they met at her father’s Savannah shoe store where Ken worked. They married six years later on September 6, 1959, and began their life at Clemson University. They went on to live in Macon, Dublin, Decatur, Alpharetta, and Hiawassee. Ken adored Phyllis and often commented on his incredible good fortune to get to love her all his days. When Alzheimer’s took its toll and Ken had forgotten who everyone else was, he remembered Phyllis. In the last few months of his life, when there were moments or days when he couldn’t place who she was, he still wanted her near. They shared a rich, beautiful life of love and companionship. Ken is survived by his two sons Russ and Keith. Ken taught his boys how to fix their cars, how to appreciate a good tool, how to repair most anything, and to never be without a pocket knife. Ken also taught his boys the value of a good work ethic, how to never meet a stranger, and to care for those you love. His boys watched their dad take special, loving care of his father, Russell Alfred Ott (deceased), his mother, Agnes Brooker Thompson (deceased), and his stepfather William Earl Thompson (deceased). In his later years, the motorcycle trips Ken took with his boys were one of his greatest joys. On the last trip Ken was able to take, his oldest grandson rode along as well. Three generations of Ott men pulling out on four motorcycles—Ken couldn’t have been happier. Ken is also survived by his two daughter-in-laws, Carrie and Kim. They were the daughters he never had and he loved and cherished them as his own. Ken is survived by his five grandchildren: Carlee Ott, Caylee Mendez, Cody (and Haley) Ott, Leo Ott and Josh Ott. Ken was a proud Grandad. At the first sight of each new grandbaby, Ken would announce with confidence, “I see red in that hair! This one’s going to be a redhead, for sure.” He was correct twice. Ken taught his grandkids how to whittle, how to make a good walking stick, and every verse of Froggie Went A Courtin’. He taught each grandchild to drive the golf cart and the boat. His favorite grandad-snack to share was a mound of hot boiled peanuts spread on newspaper, glasses of iced tea or lemonade all around. Each of Ken’s grandkids share his love of music, and near the end of his life, few things cheered him more than his youngest grandson visiting him and playing the guitar. Ken is survived by his three year-old great-grandson Roman Mendez. Even when Ken couldn’t remember his name or whose child he was, he adored Roman. “Tell me again who he is," he would whisper. "He’s your great grandson, Roman,” we would say. “He's my great grandson?” he would ask, incredulous. “Well, I’ll be! My great grandson. Now that’s somethin’.” They played and snuggled and laughed. They drank pretend coffee and ate corn on the cob side by side, a favorite for both. “He sure is a sport,” Ken would say. “He’s a sport alright.” Ken is also survived by his much-loved half-sister, Phronie Mae Carter. Ken was dearly loved by his family, his neighbors, and his friends. We his family were blessed to belong to him and to be loved so well by him. As he aged, and before Alzheimer’s took its final toll, Ken still prayed in a loud clear voice and was often overheard singing the first few lines of “I Serve A Risen Savior,” before he’d round out the forgotten parts with, "Da-da-da-da-da-dah." Ken never doubted his God or that he belonged to him. He joyfully anticipated heaven and all the friends and loved ones waiting there. With his Phyllis nearby, Ken fell asleep in a memory care facility in Cary, North Carolina and woke in the arms of God. Memorial donations in memory of Ken can be made to the Alzheimer’s Association at alz.org or McConnell Memorial Baptist Church, 84 Church St, Hiawassee, Georgia, 30546.

The family of Kennith Russell Ott created this Life Tributes page to make it easy to share your memories.