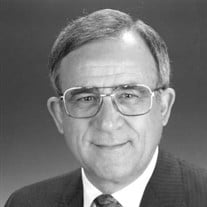 Kenneth Hunsberger Bishop, 90, of Cary, North Carolina passed away peacefully on May 8, 2022 at WakeMed Cary Hospital. He was born on October 9, 1931 in Dublin Pennsylvania. After graduating from Hatfield High School where he played basketball, Ken was drafted into the US Army. Upon his honorable discharged he received a scholarship to play basketball at Wilmington Junior College (today known as UNCW) in Wilmington, NC. The coach got him a part-time job at Belk-Beery Department Store working in the boys’ department. After graduating with an Associates Degree in Merchandising, Ken started working full-time as a buyer for Belk. Later he was promoted to manager of a Belk store in Sanford, NC, promoted again to a larger store in Hickory, NC, and then came full circle back to the Belk store in Wilmington as Vice President & General Manager. He retired in 1992 with 36 years of service. Ken married his sweetheart Dorothy Lamb in the chapel at the First Presbyterian Church in Wilmington. They had a wonderful life together for over 66 years and held hands everywhere they went. They had 2 children. He was a devoted husband, a loving dad, granddaddy, an inspiring leader, and a loyal friend who worked hard and led by example, having a strong faith in God. He enjoyed spending time with his family, traveling, fishing, watching sports, and reminiscing about the good times he’d had, the beautiful places he visited, and the special people in his life. He had a servant’s heart and gave of his time and treasures to various organizations including the Boy Scouts, Rotary International, Salvation Army, Chamber of Commerce, United Way, Merchants Association, and the First Presbyterian Church. Survivors include his wife, Dot; son Doug Bishop (Bonnie) of Hickory, NC; daughter, Donna Peffley (Chris) of Cary, NC; granddaughters, Anna Coleman (Zac) of Charlotte, NC and Abby Bishop (Tommy Penick) of Pisgah Forest, NC; and great grandson Harrison Coleman of Charlotte, NC. In lieu of flowers, memorial contributions may be made in Ken’s name to Rotary International at https://my.rotary.org/en/donate or to a charity of choice at www.legacy.com/charity/memorial-charity-donations/ A private family memorial service will be held in Hickory, NC at the First Presbyterian Church.

Kenneth Hunsberger Bishop, 90, of Cary, North Carolina passed away peacefully on May 8, 2022 at WakeMed Cary Hospital. He was born on October 9, 1931 in Dublin Pennsylvania. After graduating from Hatfield High School where he played basketball,... View Obituary & Service Information

The family of Kenneth Hunsberger Bishop created this Life Tributes page to make it easy to share your memories.

Send flowers to the Bishop family.