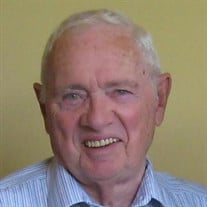 Keith Winslow Cadiz, 88, began his eternal healthy life with the Lord, on March 24, 2020, at his home in Cary, NC, under the loving care of his wife and family. Keith was born in Harrisburg, PA on September 25, 1931. He graduated in 1950 from William Penn Sr High School in Harrisburg, PA. Keith and Nancy Ann Hively married on October 1, 1960, in York, PA. He was a registered architect at Buchart Associates for 37 years, retiring in 1993. Keith was a veteran of the Korean War serving in the U.S. Army, as a field artillery operations intelligence specialist from 1953 - 1955. While serving he was awarded the National Defense Service Medal, the Korean Service Ribbon, and the United Nations Service Medal. He also served eight years in the 104th Armored Cavalry National Guard in Harrisburg, PA. In 2005, Keith and Nancy relocated to Cary, NC, to be closer to their family. Keith was known for his sense of humor and love for his family and friends. He enjoyed travelling the world with his wife while discovering architectural buildings in the places they visited. He also liked playing sudoku and cards. Keith also liked working on home projects, caring for their roses and going to Baltimore Orioles’ games. He was a member of Mt. Zion Lutheran Church in York, PA, where he served on the building committee, church council, and as an usher. Keith also served on the Board of Directors at Briarwood Golf Club and Manada Golf Course. Keith was preceded in death by his mother, Margaret Keller Cadiz Snyder; father, Charles Huger Cadiz; stepfather, Deane Henry Snyder; and brothers Charles Huger Cadiz, Jr. and Richard Lee Cadiz. Keith is survived by his wife of 59 years, Nancy Ann (Hively) Cadiz of the home, daughter Kara (Cadiz) and her husband Doug Hallyburton of Morganton, NC, and son Mark and his wife Michele (Kollman) Cadiz of Cary, NC. He is also survived by four grandchildren, Wayne Douglas Hallyburton (27) (fiancée - Chelsea Preston), Austin Samuel Hallyburton (24) (wife - Shannon Pritchard), Alexander Winslow Cadiz (19) and Alyssa Marie Cadiz (16). A memorial service will be held on Saturday May 16, 2020 at 1pm in the Chapel at the Wake Memorial Park 7002 Green Hope School Rd Cary, NC 27519. Contributions in Keith’s name may be made to the Mt. Zion Lutheran Church Endowment Fund, 2164 Mt. Zion Road, York, PA, 17406, or to Amedisys Foundation 3854 American Way, Suite A Baton Rouge, LA 70816. Keith’s family would like to express their sincere appreciation to Amedisys Hospice, Visiting Angels Home Healthcare, and Dr. John Strickler of Duke Health, for their loving care and support during his final days. As well as a special thank you to their many friends and their neighbors at Carolina Preserve at Amberly.

Keith Winslow Cadiz, 88, began his eternal healthy life with the Lord, on March 24, 2020, at his home in Cary, NC, under the loving care of his wife and family. Keith was born in Harrisburg, PA on September 25, 1931. He graduated in 1950 from... View Obituary & Service Information

The family of Keith Winslow Cadiz created this Life Tributes page to make it easy to share your memories.

Send flowers to the Cadiz family.