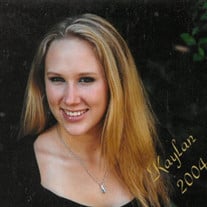 Kaylan, 33, died at her home on Saturday, March 16th. Kaylan grew up in Cary, North Carolina, attending Athens Drive High School (class of 2004) and North Carolina State University with degrees in Biological Sciences (2008) and Microbiology (2012). Those that knew Kaylan would describe her as caring, thoughtful and full of life. Her focus was on helping people showing this both professionally, by previously serving as an EMT and a public health researcher, and personally, by preparing care packages for the homeless and standing up to bullies. She is survived by her parents, Jon and Lee Ann Whitaker of Apex, North Carolina; her sisters and brother-in-laws, Danae and Jason Shipp of Cary, North Carolina (niece, Tenly), Caryn and Nick Dworski of Milford, New Jersey (nephew, Connor), and Kimberly and J.R. Drake of Fairhaven, New Jersey; and several aunts and uncles and cousins in both Maine and New York. Sometime this summer, a celebration of life is planned. Those interested in attending can contact the family. In lieu of flowers, donations may be made to National Alliance of Mental Illness (NAMI) of Wake County, 120 W Hargett Street, Raleigh, NC 27601 or the American Chronic Pain Association (ACPA), P.O. Box 850. Rocklin, CA 95677 USA.

The family of Kaylan Marie Whitaker created this Life Tributes page to make it easy to share your memories.

Send flowers to the Whitaker family.