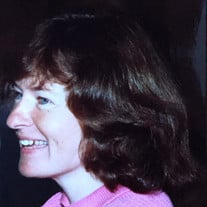 Karen Elise Barkie, age 69, passed away peacefully on June 10th, 2018 in her home in Cary, NC. Karen is survived by her husband of almost 49 years, Bob, and two sons: Scott Barkie of Morrisville, NC and Eric Barkie of Cary, NC. She is also survived by her brother, Daniel P Kelleher, (Sue Klein) of Colton NY and sister, Janis Kelleher-Dawsey, (James Dawsey) of Saratoga Springs, NY and their children: Kristopher Dawsey (Chen and son Benjamin} of NY, NY and Kathryn Dawsey of Waltham, MA. Family members also include David Barkie {Charlene} of Clifton Park, NY, Charles Barkie {Marcella} of Hooksett, NH and numerous nieces and nephews. Karen was born February 11, 1949 in Cincinnati, OH, the daughter of the late Daniel P and Bernice E Kelleher. She grew up in Massachusetts and New York. She married in 1969 and spent several years in Arlington, VA while Bob served in the military and then spent most of her married life living in New Paltz, NY. She attended SUNY Albany, University of Virginia, and graduated from SUNY New Paltz. She was a founder and member of the New Paltz Homeowners Association and belonged to the New Paltz Art association, awarded several ribbons over the years. After her now adult children both moved to NC, she and her husband joined them and bought a home in Cary in 2003. She and Bob enjoyed the many amenities Cary offers. They often walked around their neighborhood, on the local walking trails, within their neighborhood parks, and regularly worked out at the gym. She particularity loved walking in Apex Community Park which was often filled with geese and ducks which she loved to watch and photograph. They were both members of the Cary Senior Center and took many interesting and enjoyable courses. They regularly were part of the Cary Art Loop where they met with and spoke with local artists who were exhibiting at the time. She was especially happy that she and Bob lived close enough to their sons, Scott and Eric, to spend a lot of enjoyable time with them. Karen was a talented and accomplished artist. Starting from when she was a child making dolls out of cloth, cardboard and coke bottles. She enjoyed creating objects using all kinds of media. With fabric she made clothes for the family, slip covers for the coaches, batiks to hang on the walls and curtains and quilts. She painted with acrylics in a Grandma Moses style which brought her several awards in local art exhibitions and sales. Karen also painted with acrylic on paper and paper batiks. She has more recently been working on wooden automata, which are wooden structures within which a handle drives gears which animate the figures to move when the handle is turned. She made her automata completely by hand from here own designs. She drilled and sawed all her gears to perfection, carved all of the features, and put them all together to transform them into unique works which she made into movies which are currently on youtube. She also loved working with video, both shooting actual scenes of wildlife, and making video of her automata. Combining both realistic video she took in the local area with her own animated designs incorporated into a single video was an exciting field she was exploring. Although she had great enthusiasm for art and fully embraced her artistic abilities her true passion was being a mother to her sons Scott and Eric. She instilled in them her qualities of honesty, gentleness and kindness which was a true reflection of how she lived her life. She was very proud of her children and cherished every moment she was able to spend with them. We especially want to thank the Transitions LifeCare Hospice staff and volunteers who provided such loving care for Karen. A private service, spreading of ashes, and celebration of life will be held at the convenience of the family. Online condolences may be made at Wakefuneral.com Memorials may be made to the SPCA of Wake Country 200 Petfinder Lane, Raleigh, NC 27603 or Transitions Life Care 250 Hospice Circle Raleigh, NC 27607

Karen Elise Barkie, age 69, passed away peacefully on June 10th, 2018 in her home in Cary, NC. Karen is survived by her husband of almost 49 years, Bob, and two sons: Scott Barkie of Morrisville, NC and Eric Barkie of Cary, NC. She is also... View Obituary & Service Information

The family of Karen Elise Barkie created this Life Tributes page to make it easy to share your memories.

Send flowers to the Barkie family.