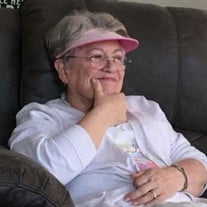 Judith Peek Kapadia D’Allaird, known to her family and friends as “Judy” passed away on August 29, 2021 at the age of 80. She was born on January 4, 1941 in Bloomington, IL to Roger and Mildred (Burt) Peek. Judy grew up in Pontiac, Illinois and was affectionately referred to by her parents as “the caboose” as she was the last of three siblings. Judy was blessed to find true love twice in her lifetime. She met her first love Yash in 1964 and they married in 1965. Together, they had two children, Raj and Malina. Judy gained a large and very loving extended Indian family. Yash passed away suddenly in 1985 and it took Judy until 1992 to find her second love in Walt D’Allaird. Judy married Walt in 1993 and she gained four stepchildren and many step grandchildren/ great-grandchildren. Walt and Judy lived on the road in an RV for many years before finally settling back in Cary, NC. Judy is survived by her son Raj (Wendy) Kapadia of Cary, NC, her daughter Malina (Joe) Monaco of Cary, NC, her sister Donna Edgerton of Detroit, MI and her husband Walt D’Allaird of Garner, NC. Additionally, she is survived by four grandchildren: Matt (Logan) Kapadia, Caroline Kapadia, Spencer Monaco, and Margaret Monaco. Judy was preceded in death by her parents Roger and Mildred Peek, her first husband Yash Kapadia and her brother Bob. No memorial service will be held due to COVID. The family would like to thank the incredible staff at Phoenix Assisted Living in Cary, NC (Louisa, Mini, Cici and Seena) and Community Hospice (Vickie) for their compassionate care and support over the last years of Judy’s life. In lieu of flowers, the family asks that donations be made to the Lewy Body Dementia Association in Judy’s honor: https://www.lbda.org/donate/ Donate - Lewy Body Dementia Association (lbda.org)

The family of Judith Peek Kapadia D'Allaird created this Life Tributes page to make it easy to share your memories.

Judith Peek Kapadia D’Allaird, known to her family and friends...

Send flowers to the D'Allaird family.