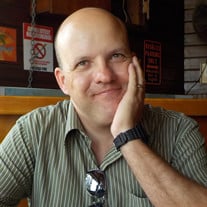 Joseph J. Sumakeris Jr. passed away on November 7th at home, surrounded by his family, after a courageous battle with prostate cancer. Joe was born on October 4th, 1967, to Joseph J. Sumakeris Sr. and Mary Elizabeth Ivey Sumakeris. He grew up in Fayetteville, and graduated from Westover Senior High School in 1985. He received his BS in Materials Science and Engineering from NCSU in 1989, and his PhD in Materials Science and Engineering from NCSU in 1995. He spent his entire professional career at Cree Inc., working with silicon carbide semiconductors and devices. He was a consummate critical thinker and problem solver, who invented or optimized many engineering processes at Cree, and was awarded 12 patents during his career. Joe was a loving husband and a devoted father, who cherished spending time with his family. He prioritized spending one-on-one time with his wife and each of his children, building a lifetime of memories with them over shared experiences, both as elaborate as rafting the Grand Canyon, and as simple as Harry Potter movie marathons. He continually strove to be present in the lives of people that he cared for, and always fully supported the interests of his family. Joe was happiest when he was tinkering with an engineering project of some sort, such as private aviation, adding custom features to his house or his vehicles, brewing beer and mead, and building model rockets. He loved his dogs, and was passionate about helping fight the egregious cruelty of puppy mills. Joe is survived by his wife of 21 years, Elisa Sumakeris, and children Kathryn, Joanna, and Lucas of the home; sisters Marriann Easom of Fayetteville, and Lynn Heinrich of Caldwell Idaho; brother-in-law Greg Fox and wife Becky of Clemmons NC, nieces Mary Waggoner and husband Zach of Caldwell, ID and Jessica Heinrich of Nampa, ID; nephews Daniel Sumakeris and wife Lindsey of Fayetteville, Roy Easom of Fayetteville, Joshua and Jackson Fox of Clemmons; and grand-nephews Harrison Waggoner and Joseph Sumakeris. A Celebration of Life will be held on Tuesday, November 15th, at 7PM at The Matthews House, 317 W Chatham St, Cary, NC 27511. In lieu of flowers, Joe requested that donations be made to the North Carolina Veterinary Medical Foundation, 1060 William Moore Drive, Raleigh, NC 27607, designated to the Joe Sumakeris Memorial Fund, in order to support the fight against puppy mills.

The family of Joseph John Sumakeris Jr created this Life Tributes page to make it easy to share your memories.